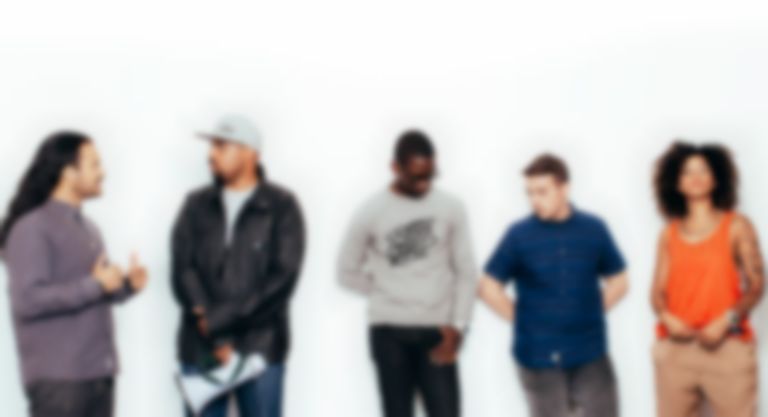 “Well this is our last tour before we go on break, and so we pushed management to let us come to Colombia,” Kalaf Angelo told us ahead of their show in Bogotá last Friday. “We came here before and loved it.”

Given the reaction they get tonight, it’s no great surprise why.

Bogotá’s Royal Center is a nice enough venue, except it heats up like a pressure cooker powered by a thousand suns. It’s nastily sticky. It’s the sort of venue that even if Low played, crowds would overheat. So, things get drippy tonight. Seriously, the beers I ordered were hot. Not like London Pride tepid, but hot, like a model.

Buraka’s schtick has been the same for years now: getting people pogoing around like plonkers to frenetic, transatlantic beats. It’s fast, frenzied and rollicking fun stuff.

The event-ness of the night is exacerbated by the roster of bands they bring with along. Also present is Freaky, another ludicrously upbeat Colombian. He opens things up with requisite bombast.

Then we have Colombian noiseniks Systema Solar, who are a ruddy hoot. They have a song about living by the button of your trousers, whatever that means, and another that lists food you get on the Caribbean coast. Both are a blast tonight.

After that is Jamaican rapper Charly Black. He’s silly fun, though the only song anyone knows is “Party Animal”. It doesn’t really matter though because he plays that for 15 minutes at the end. I once saw Neil Young do that with "Rockin’ In The Free World". I’m not sure anyone has mentioned Charly Black and Neil Young in the same breath before, and I just did it twice. Normally I find listening to that kinda thing to be akin to getting attacked by a pack of wolves - and not even sexy ones - but tonight I’m on board. Maybe because I’m sloppy drunk.

After that it’s all fun and games as Buraka get going, with Angelo stomping up and down the stage like some possessed loon. He’s hectorin’ and hollerin’, and it’s wonderful. Given his unhinged freneticism, it’s easy to forget that he’s one of the most perceptive and respected voices of the Portuguese Angolan community, published in national papers and other serious things.

But tonight isn’t about serious things. It’s about the band having a last hurrah and Bogotá going barmy.

Singling out individual tracks is rendered slightly moot by the fact they all are such cock-a-hoo rattlesnakes, but "Hangover (Bababa)", "Sound of Kuduro", and "Tiro o Pe" are particular delights, sending the crowd into delirium.

Midway through the set, I move to a different level - Royal Center has a billion floors, like Koko, or a provincial carpark - to see if the intoxicating heat I’m feeling is just some microclimate. It’s not. This whole place is an oven.

One of the inherent joys of gigs in the Colombian capital is the insatiable appetite for live music. Bands don’t come here often, so when one does, attendees behave like right nutters. What’s so cracking about tonight is that the feeling is tangibly mutual, and don’t take it from this muggins. "Colombian rhythms are in our DNA", Kalaf told me a few hours before taking the stage. “We had to come back".