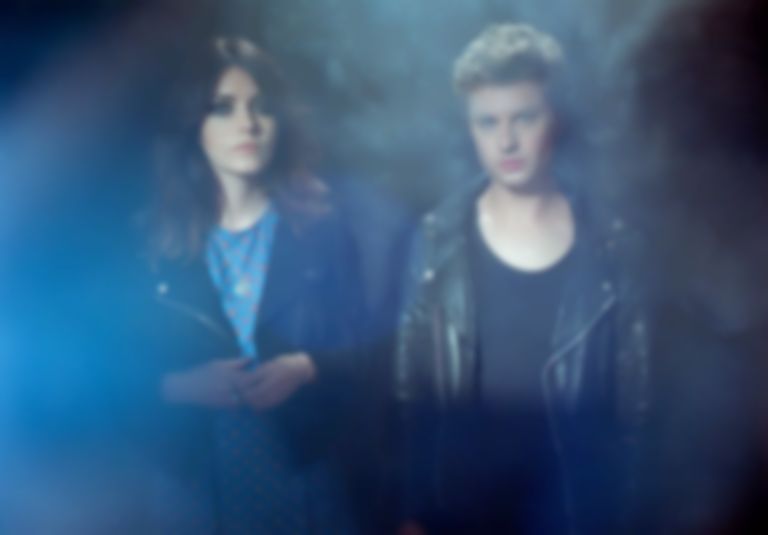 “It feels like it’s been fucking ages since we played in Manchester.”

​In actual fact, it’s been just shy of two years; in Blood Red Shoes’ terms, though, that’s an eternity. They’ve long since carved out a formidable reputation for being one of the hardest-touring bands on the circuit, and they’re certainly living up to it in 2014; tonight’s show comes towards the end of a mammoth European stint that spans the best part of the past two months.

That last Manchester date, in May of 2012, was upstairs in the bigger Academy 2; the larger room didn’t really suit them, although the booking of Club Academy isn’t particularly welcome either - it’s an awkward room, with the lack of a raised stage making for poor sightlines, especially when fifty percent of the band is sitting behind a drum kit. They were on typically aggressive form last time out, although there was unquestionably something missing; the perfectionist attitude they’d taken into the studio on their third record, In Time to Voices, didn’t sit comfortably with the limitations of the stage, and the fact that they’ve only two pairs of hands between them meant that a lot of the cuts on which they’d shown the most genuine progression had to be left off the setlist.

That’s not a problem they’ve encountered with last month’s Blood Red Shoes; it dominates proceedings tonight, with the furious two-minute instrumental “Welcome Home” an obvious choice to kick things off. There’s an aggression running through it that characterises most of the new material aired; Laura-Mary Carter must be lugging a considerably busier pedalboard around with her these days, because the sheer variety of noisy, belligerent guitar sounds on the new record is impressive. “An Animal” is driven by a savage riff, “The Perfect Mess” channels the sinister twist on The Black Keys’ sound that first emerged on the Water EP, and “Speech Coma” - which, in wonderfully old-fashioned punk style, had its gory video banned by MTV last week - is perhaps the evening’s most brutal moment; there’s a deceptive sing-song quality to the vocals that masks its menace on record, but live, it’s a wholly different proposition.

Most refreshing is the fact that, four records and ten years down the line, the band are finally comfortable with mixing up their setlists. “It’s Getting Boring by the Sea”, which ironically was in danger itself of becoming stale, appears to have been axed indefinitely, whilst habitual set-closer “Colours Fade” - a moody, seven-minute maelstrom - is shuffled to the middle of the pack in disarmingly effective fashion. Last time out, it was genuinely weird to see the duo pay so little heed to the album they were promoting; Blood Red Shoes is front and centre tonight, though, and the inclusion of “Cigarettes in the Dark”, the groove of which borders on R&B, is a nice touch.

The encore’s a swift one, but still manages to touch on a few of the band’s many faces; the ominous slow-burn of “I Wish I Was Someone Better” and “Red River”’s expansive, galloping guitar are relayed with trademark fizz, but it’s “Je Me Perds” that really sums up the pair; it’s an explosively rowdy ninety-second punk jam that sees Carter and drummer Steven Ansell trade confrontational vocal turns whilst positively punishing their respective instruments. It’s a fitting way to sign off, because Blood Red Shoes have pretty much all the attributes of a great punk band; they’re angry, they’re honest, and they’re unfailingly fun live.