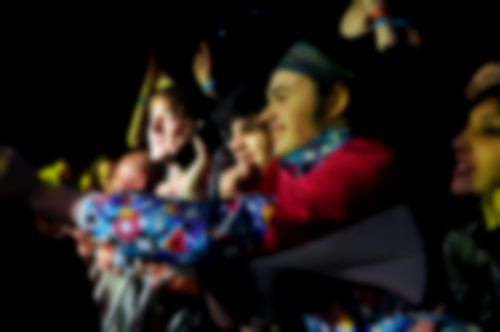 Our coverage of the All Tomorrow's Parties weekends continues as Lauren Mayberry loses her ATP virginity to Iggy Pop, Liars and Spiritualized. With photography from Ama Chana and Leah Pritchard.

Having left Glasgow at a ridiculously early hour to ensure prompt arrival at ‘My First ATP’ (Early Learning Centre™), it is more than slightly disappointing to encounter traffic issues on the M5 and miss Broadcast entirely and only just catch the closing chords of Built to Spill.

Cold Cave’s is the first full set we see, in the dark, mid-sized Centre Stage. With sweaty synthesised beats and layered, slow building sounds, it’s a quietly intense experience. Heavy bass connects with the chest, vocals going from a deep Ian Curtis style to cat calls and howls, careening through a climactic set to a tight and abrupt end.

Iggy and the Stooges- or ‘the dregs’, as their idiosyncratic front man refers to them- are a high-voltage juggernaut from the off. Even with grey hair and perhaps inappropriately backwards caps for men of their stature, this level of showmanship is undeniably rare in contemporary bands- and even when it is, the stench of cliché is sometimes overwhelming. Refreshingly humble, they invite fans to the stage, ensuring each hand is shaken and each autograph signed before they are thrown back into the wilderness. ‘Search and Destroy’ comes early in the set, Iggy’s distinctive voice instantly recognisable, with handfuls of favourites packed in throughout (including ‘I Wanna Be Your Dog’, never fear). Classic. 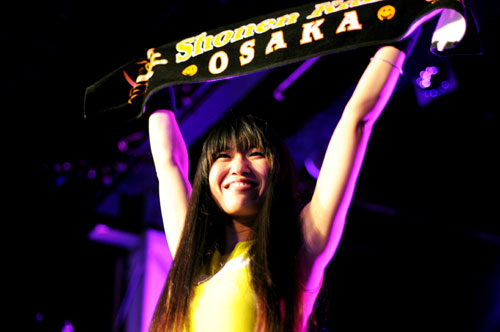 After this, it’s off to Shonen Knife who are as pleasantly full of Raw Power as the aforementioned punks. With group harmonies, chuntering Ramones-style riffs and unrelenting hooks, the Japanese three-piece fire out brash bubblegum punk, brimming with positivity but a ferocity which belies their cutesy matching pastel-coloured frocks. Yelping vocals and break neck speeds, their sound is not-so-quietly confident and decidedly massive for such a small bunch of ladies.

Liars, the highly anticipated closing band of day one, don’t fail to deliver. Singer Angus Andrew uses the full length of the stage, waving to the crowd like a crazed nomad and leading the troupe from song to song in an instant, very business-like with little between song chit-chat. With great dynamic range, the live version of Liars is faithful to the record but adds a little extra flare here and there. ‘Plaster Casts of Everything’ features lower vocals than on recording, but is still engaging, the effect-laden vocals at point very effective, but other times lost in the mix. The guitar tone is beefy and assertive- not unlike the Yeah Yeah Yeahs at times- and the drummer impresses with his ability to spin from understated to full-on wailing in the blink of an eye. 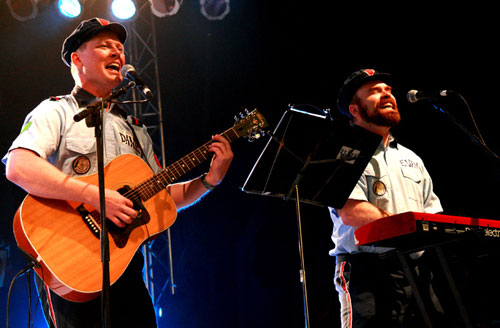 This morning’s journey to Butlins is decidedly shorter than yesterday (ie: a ten minute walk), so I have no excuse to be late and arrive well in time to get a cup of tea and watch Danielson, the first arrival of the day on the Pavilion stage. Being relatively unfamiliar with them, it was a surprise to see the six-piece dressed like scouts or postal workers, all in matching sky blue outfits with name tags and box hats, which made the guy behind me worry if they were “some weird American family cult”. That aside, it was a refreshingly individual set of story-telling country folk, with a similar ethos to a more upbeat Sufjan Stevens, with a variety of percussion and cooing backing vocals plumping up the sound. The main vocal is distinctive, almost spoken, spitting out interesting lyrics and suited to the songs, but could be a potential ear grater for those not instantly won over. The between song banter is almost indecipherable, sounding like a Disney character on speed, ending the whole set on the phrase “Did I step on your trumpet? I hope not.” Fitting.

Lightning Dust, both members of Black Mountain, are a beauty to behold, with Amber Webber in possession of one of the most beautiful voice boxes of the weekend. Slow, slithering harmonies go over a tempo which is generally low, every understated sound weaving, complimenting and finding its place. More frantic moments are accompanied by bubbling synths and thick laptop beats, wonderfully juxtaposed to the Beach House/Portishead-esque vocals, dreamy and delicious. 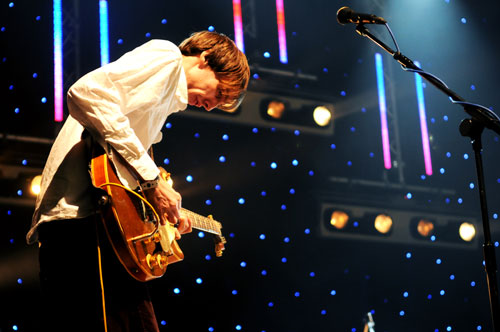 Deerhunter are a comparatively loud slap in the face. Drums and bass driving from the off, and present throughout the set, it’s difficult to tell how well their sound worked in the high ceilinged pavilion, certain intricate details in their playing finding it difficult to permeate the bottom end layer at points, leaving the sound slightly muddy and lost- a shame for those unfamiliar with the songs. Other times, however, the music is rich and atmospheric, layering sound upon sound and eerie reverberation, epic Appleseed Cast-like guitar climaxes not unfamiliar to this well-toured bunch. Despite illness, Bradford Cox maintains an impressive vocal range and seems as excited about some of the other bands as the regular laymen like myself.

After a quick trip to the impressively relentless rhythm bonanza that is Konono No 1, we head to She and Him, alongside every other person dying to see their living doll, Zooey Deschanel, in the flesh. Her voice is clear and pure, sitting as well over M Ward’s sliding and picking just as snugly as it does on record. They fire through a set of cutesy retro pop, from ‘Change Is Hard’ to ‘This Is Not A Test’ and latest single, ‘In The Sun’, few feet unable to resist a good tap. With a handful of whimsy and a fistful of delicious harmonies, it would be hard to dislike this talented bunch. Yet, it’s equally hard to feel blown away, given the other, more boundary-pushing bands on display this weekend. 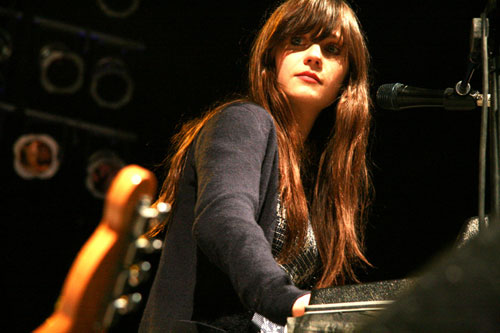 Residents are creepy as hell. With their front man bedecked in what looks like a creepy Krusty costume (a fitting homage to the organiser of this weekend, Matt Groening), they are undeniably weird but wonderfully showy, telling tales of graveyards, murder and suicide. It’s incredibly difficult to pinpoint a style but easy to see how, once they found this niche, they were able to survive 40-odd years. A deep, rumbling vocal (almost Tom Waits-like, if you don’t look at the clown shoes) slides over eerie and alarming soundscapes, dynamics coaxed and cajoled to great effect. ‘The Mirror People’ and ‘Unseen Sister’ are particular highlights, seeming more like dirge story-telling sessions than a set of songs.

Undeniably exuberant and high in energy, Ponytail change the mood of centre stage entirely. Sunshiny riffs and punchy fills revel under the female vocalist’s squeaks and yelps, no lyrics discernable, but having a bloody lovely time and handing us a coherent, confident package of fun.

As evening draws in, the dreamy soundscapes of The xx are rolled out for their first of two sets this weekend. Although influences can be plainly heard in their chilled-out electro-buzz, it would be unfair not to notice that they don’t actually sound like many bands happening right at this very moment. Their androgynous aesthetic, post-rocky elements and sensual layering make for a stiff, controlled sound that knows exactly what it’s going for. 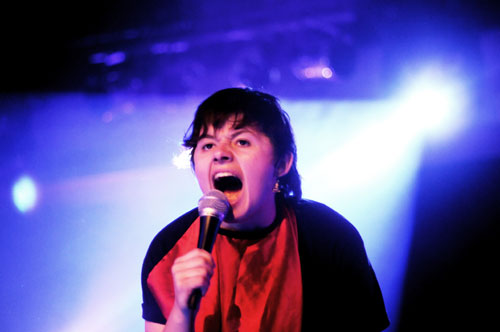 Sunday starts with Boredoms and their second set of the weekend. In a word: incredible. Guitars mounted at the back of the stage, each tuned to different notes and bowed with drumsticks, whilst shimmering cymbals weave a tense backdrop. Then, it’s into a rumbling mass of rhythm that will continue with an insane about of stamina for over an hour. One drummer is brought in over the crowd on a plinth carried by eight men, playing at full pelt whilst being delivered to the rest of his crew. Clearly painstakingly rehearsed but with an instinctive feel, Boredoms are a crazy carnival of sounds and an eye-opening experience for anyone who’s ever lusted over a vintage Ludwig.

A brief time window allows us to see Juana Molinas - using subtle electronic sounds and loops to showcase her descriptive- before setting up camp in the pavilion for Daniel Johnston. For the first time this weekend, Groening introduces an act, proving he is just as excited about this set as the other festival-goers. Poignant lyrics about love and loss illustrate the sad poetry which draws Johnston fans out in force, including many songs from Continued Story and Hi How Are You. His idiosyncratic, intimate style is exactly what you would expect, and terribly affecting at points, but also potentially lost on such a large stage. Humble when faced with rapturous applause, Johnston gives a tiny, minute-long encore to round off his heartfelt set, doing exactly what he knows best. 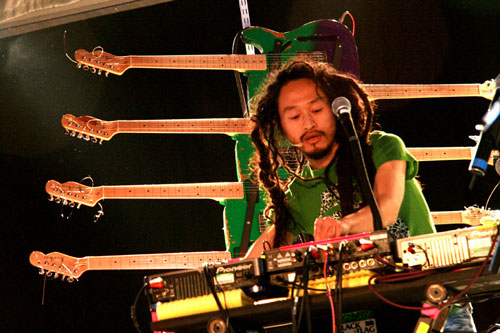 Spiritualized, performing Ladies and Gentlemen We Are Floating in Space, are unlike anything else on the bill. With an orchestra and choir lining the stage- thirty people completing the band at one point-, they exemplify incredible musicianship and mixing of genres which allows the album to sound exactly how you imagine it would, but perhaps even richer. Thick, harmonised sounds and memorable lines (“Though I have a broken heart, I am too busy to be heartbroken”) move from a gentle lilt to a profound cacophony, key hooks are repeated until that final, gripping hold.

Leaving the pavilion early to enact ‘stealth like a ninja’ plans to get an in demand spot for Joanna Newsom, our plans are scuppered by sound check issues. Doors to the centre stage don’t open five minutes after the elfin princess was due to begin, but when she does, all the grumbles subside. A vision with creamy visage and Rapunsel-style hair, her story-telling voice is clear as glass and her range something to behold. Subtle yet theatrical instrumentation, flitting from trademark harp to more Amos-friendly piano moments, Newsom’s nimble fingers are familiar with a trill and arpeggio by this point, playing a healthy mix of material. Her drummer too is incredibly controlled and inventive, making such understated percussion interesting with a variety of approaches, including even playing the snare with palms and fists. Due to the late start, the band are unable to play the full set, but were still even more involving and captivating live than on record.

Having delayed their set, presumably so as not to upset the intricate folk of Newsom upstairs, The Raincoats display quite another kind of girl power. Pulsating and roaring through a ripping set, it’s easy to see why these women influenced every second Riot Grrrl and Cobain in between, discordant, grungy and succinct. A mixed set, including songs from their self-titled record and Kitchen Tapes, their rare set finished with the famous cover of ‘Lola’. 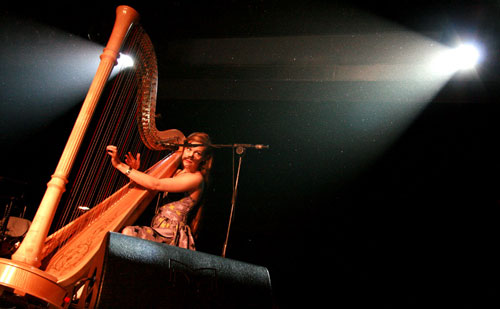 Although there was some humming and hawing about whether to see Trash Kit or CocoRosie, our choice to opt for the French-American sisters was not to be regretted. Opening with ‘Blame it on Me’, from their latest record, Grey Oceans, they are a sight to behold. The siblings are dressed in white pyjamas, enacting animated, swaying dance moves, whilst a beat boxer performs in a white hooded onesie. Their complimentary vocal styles, one classical and operatic whilst the other sounds almost like a choked Edith Piaf, add to the beautifully arranged and orchestrated backdrop. Ethereal and bizarre, they play a mix of material and demonstrate fully their ability to meld genres that shouldn’t really go together, from classical sounds, to electric blips and honky tonk piano. Just the right mix of poignant beauty and surprisingly upbeat, CocoRosie make for an unexpectedly perfect closing band for a really broad weekend. As is always the way with curated festivals, once you begin to trust the taste of the person in charge and dabble in acts unfamiliar to your ears, you will rarely be disappointed- and I suspect that myself and Matt Groening could share a mix tape or two before disagreements started to arise. 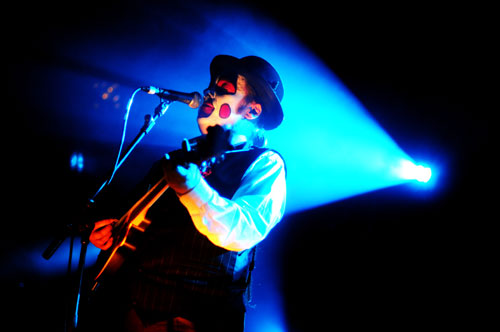 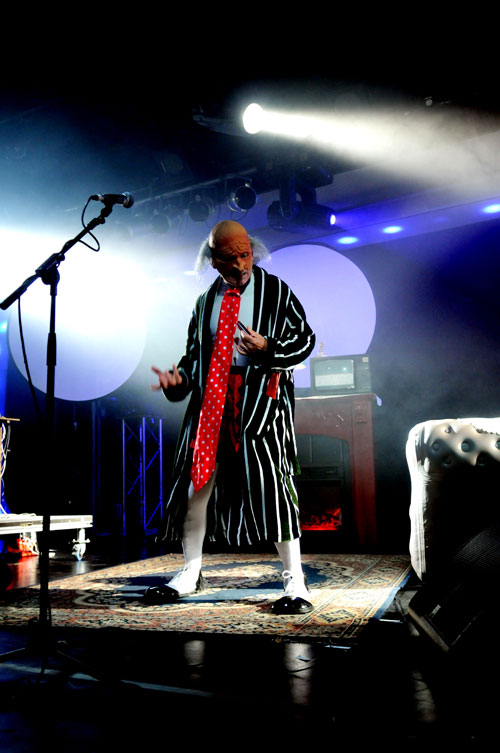 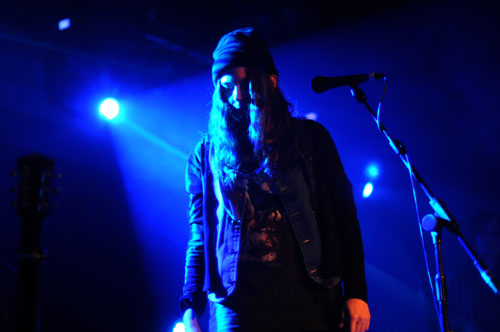 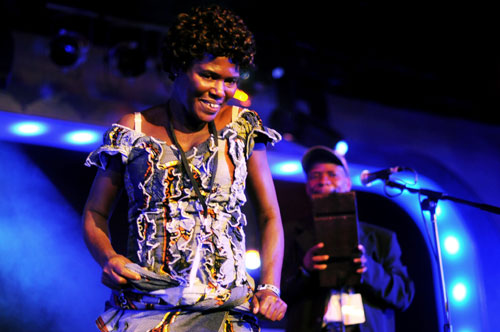 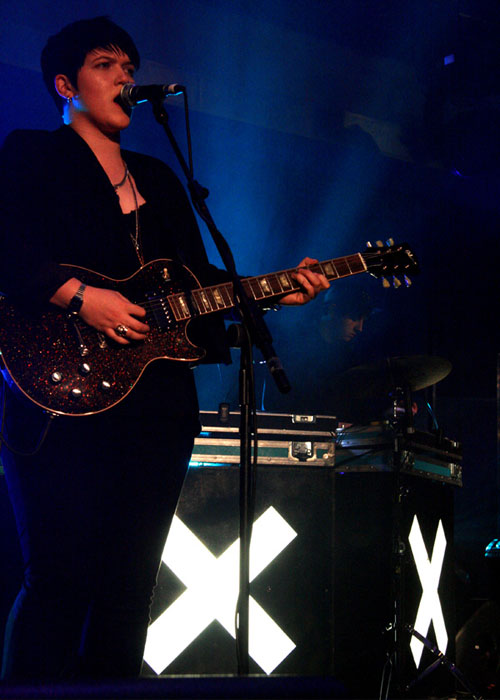 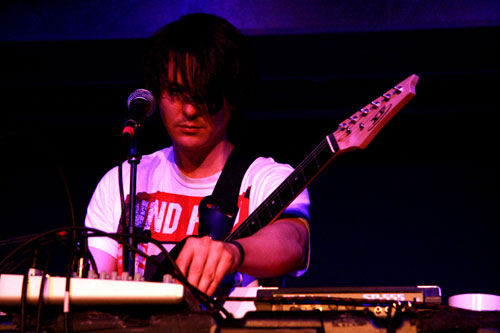 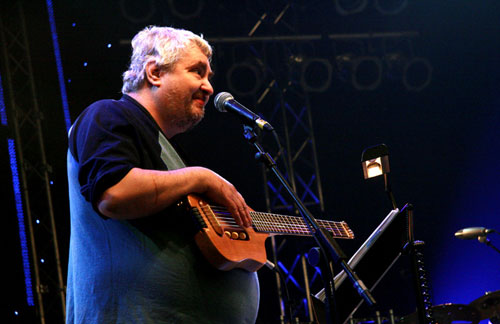