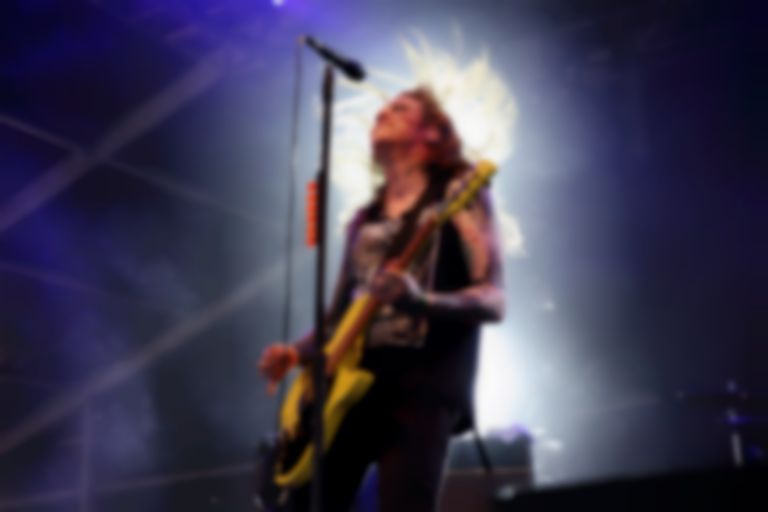 Over the last ten years, Against Me’s sound has undoubtedly gotten a bit softer and a bit rounder.

Tonight’s opener, "True Trans Soul Rebel", bounces into life on a surf-punk riff you’d struggle to trace back to their earliest recordings, with a stark, distinct chorus which pops and punches. This is now typical of their work. As unlikely as it would have seemed a decade ago, it now makes perfect sense that Against Me! are set to open for a band like Green Day, for better or worse.

Tonight at London's Electric Ballroom (8 December), only a clutch of songs like "TSR" and "Tonight We’re Going to Give It 35%" point back towards Laura’s earlier style of songwriting; wordy, discursive, ramshackle flashes of lightning. Purely sonically and structurally, you can hear today’s Against Me! as being a more middle of the road band than they were 15 years ago.

But their sound is only half the story. In 2016, it’s hard to think of a set of lines more punk than something like “you want them to see you like they see any other girl / they just see a faggot”.

As is now well known, frontwoman Laura Jane Grace came out as transgender a few years ago, and has since spoken candidly and movingly about her experiences of gender dysphoria. The resulting albums have explicitly explored themes of gender and sexuality which were only implicit and coded in her work until then. The result is not just astonishingly open - and badly needed - documentation of transgender experience, but also a jolt of confidence and heart into songwriting that was honestly starting to feel a little stale.

Any longtime fan you can see it in live shows too. You’d be lucky to get a sentence of stage banter out of Laura a decade ago - quickly thanking the venue and support acts before firing back into rapid onslaught, without even gaps between songs, never mind words. Tonight she’s positively chatty, talking about Trump, self-acceptance, her history, and her future. She’s visibly more comfortable in herself than she’s ever been, and it’s an energy which translates to the songs and the performance. Songs like "Bamboo Bones" and "Black Me Out" now reach for the truly anthemic.

Over seven albums, Laura’s songs chart seismic changes in the history of Against Me!. As a result, her body of work is tangled by a few apparent contradictions in attitudes towards anarchism, major labels, and their status as a DIY punk band.  In some ways, it might seem fickle for a crowd to shout “the revolution was a lie” one moment, during "I Was A Teenage Anarchist", before singing along to "Baby, I’m An Anarchist" in earnest just two songs later. In another way, it’s entirely consistent. What holds it all together - and what makes tonight such a triumph -  is Laura’s unwavering honesty to herself over 15 years of songwriting, always facing up squarely to her experiences of politics, punk and gender.