Though this trip was my first real rock tourism jaunt, my friends are seasoned veterans and most would indeed be leaving me temporarily to jet down to LA for an evening with Jon Brion. So, alone I set off in the early morning sun for a day of difficult decisions. I eventually decided to try and split my time between two venues, and set off for the secluded gentle gully that was home to a smaller stage, before a return to the main stage later. The shade provided blessed relief after nearly burning my face off in the previous two days and meant I could resist buying a natty festival cowboy hat. It was also an appropriately leafy setting for Irish singer-songwriter Fionn Regan. Those around me were not familiar with him, but with influences such as Bob Dylan and Neil Young and looking like a member of the Byrds circa ’68 he was destined to go down well in this location. Quite a few paid a visit to the merchandising stalls later. Just half an hour, with partial drum and female vocal backing. If there is a criticism, it was one of circumstance not performance, since wordy heartfelt songs had to fight to penetrate the sleepy cool morning vibe and thin early audience. But he managed it, despite the handicap of being announced as a ‘she’ by the straight-laced ‘county sheriff’ radio presenter MC – to which he quietly quipped ‘Sorry, I’m not wearing my high heels’. So, here’s a tip for success in the US: get a haircut Fiona.

A short break getting to know my neighbours better and luckily discovering the traditional festival semi-secret of tomorrow morning’s expected Emmylou sound check, and Allison Moorer took to the stage. I suspect (never having heard her before but having made a few enquiries) her recorded work to be a lot smoother in a country AOR fashion, and therefore definitely not to my taste, but her marriage to Steve Earle may well see her sound develop in a positive direction. Certainly live solo with an acoustic guitar she was fantastic – great voice, good songs and second top redhead of the festival. Buddy Miller came out for some raunchy electric guitar echoing through the trees for a cover of Patti Smith’s “Dancing Barefoot” and the day more or less took off from there. Then Steve Earle appeared to duet on the 60′s ant-war protest song “Where Have All The Flowers Gone”. Nose to nose, strumming hands almost colliding – it was a lovely moment. And in case you’re wondering, Steve is deliberately looking a bit rougher than usual at the moment since he’s playing a bum in gritty US show The Wire. Allison Moorer finished with her theme song from the film “The Horse Whisperer”. Again, maybe slushy on record (not heard it myself), but it worked for me stripped down and raw.

Steve Earle then hung around at the side of the stage to watch one of his mentors: Guy Clark. A buddy of fellow Texan songwriter Townes Van Zandt (“Townes Van Zandt is the best songwriter in the whole world and I’ll stand on Bob Dylan’s coffee table in my cowboy boots and say that.” – Steve Earle), he had a similar style, and whilst I had heard of Van Zandt, this was another old ‘legend’ who the crowd were going nuts for that was completely new to me. But as far as I was concerned that was all part of the reason for coming. Not someone I’m likely to seek out on CD, but great to witness live as the real McCoy in the lineage of American singer-songwriters. Banter and songs that were sometimes hell raising (like a tale of making bullets in the garage), sometimes overly sentimental; Clark performed without a set list – taking requests and accompanied by Verlon Thompson – who might even have pipped David Rawlings to the accolade of best guitarist I saw that weekend. That is really saying something.

After that deep south experience, it was back to Blighty with Nick Lowe solo and acoustic for over an hour, though there were bursts of mockney Elvis to bridge the Atlantic gap. I was glad to see how appreciated he was, and even the British humour in his patter succeeded. He was very upbeat to be coming to the end of his “gruelling” US tour (“I do it so you don’t have to”) despite sporting a rather angular hack of his usually lustrous silver barnet. An extremely varied audience ranged from indie teenagers brushing up on their music history to what can only be described as a gaggle of groupies (back stage passes and all) looking like thirty-something Paris Hiltons in retro frocks – complete with small dog. At least they knew all the words. Heavy on songs from the rather good new album, Lowe had the gully truly bopping with “I Knew The Bride When She Used To Rock And Roll” and since Bay Area favourite Elvis Costello played the festival last year, “Peace Love And Understanding” from its actual writer was greeted with awe. If we’ve got one thing to thank Curtis Stiger for, it’s that the royalties from his cover of that song will keep old Nick solvent for the rest of his days.

At this point my schedule called for a change of scene. Later I heard that the following Boz Scaggs and his ‘all star’ band had gone down a storm, and elsewhere the raucous Subdudes and cowpunk of The Knitters had people on their feet throughout. I practically had to fight my way out of the narrow funnel that led to the stage, and only then did the full scale of the event hit me. The sunny Saturday had brought out a lot of passing traffic as well as real music fans, so it was a real effort to get any kind of vantage point back at the main stage. John Prine was drawing huge crowds not far away, but I was angling for festival darlings Gillian Welch and Dave Rawlings. Deciding that a view more than compensated for closer, but still not very close, physical proximity, I settled down to observe Ricky Skaggs and Bruce Hornsby (yes – the “Way It Is” man) with band Kentucky Thunder. Observed is the correct verb, since the distance, and majority of the music, left me mostly unaffected. However, there were hundreds of barefoot hillbillies (mostly young high student kids) pressing on the security cordons of the normally sit-down only main stage arena. At the signal they were allowed their half hour of madness – and it’s a wonder they could be persuaded to leave later. That sight alone made for an entertaining time.

My only regret from the whole weekend was that I was not closer for Gillian Welch and David Rawlings. If there is anyone reading this who does not have at least two of their albums in their collection – do something about it now! I was just close enough to see David wrestling with his guitar in typically fanatical concentration and drawing applause at each break as they played their intricate arrangements beneath Gillian’s haunting tones and their combined close harmonies. And speaking of which, Emmylou Harris joined them on stage for the a capella “Didn’t Leave Nobody But the Baby” – David having to cover the part normally taken by a third female. Just marvellous – and as my friend said: “just about as close to being able to hear a pin drop as you’ll get in a crowd this size”. And what would their set be without a murder ballad: “Caleb Myer” finished things off. This was the second of the trio of acts that had been the real motivation for this trip, and it has only made me more determined to catch them a lot closer when they finally get back to the UK. 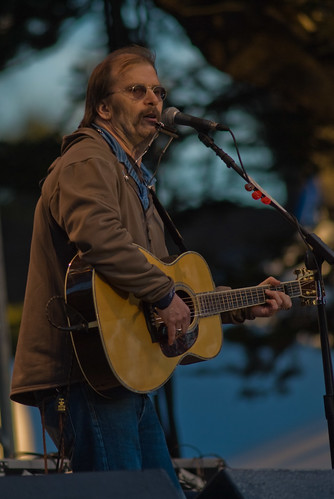 It was now 6pm and things were running a bit late. Banjo maestro Bela Fleck had been massively popular on the second stage before Los Lobos ripped it up with what I was told was a stellar performance featuring many guest spots. I had opted for Steve Earle. In 1986 I picked up his debut, “Guitar Town”, as one of the artists that was establishing the ‘New Country’ genre that opened a lot of other musical doors to me. He has been through a lot and is one of the most interesting and passionate individuals making music today. In past years at the festival he has appeared with his ‘Bluegrass Dukes’, but this time he took to the stage alone – introduced by Warren himself – a strange meeting of apparently diverse politics if ever there was one.

The first half of his set was, for me, blighted by too much traffic as families left as dusk settled in and hipsters arrived. It was the first time I had witnessed the oft described American scenester in action – groups standing around with their backs to the stage chatting with absolutely no regard for the music. Incredible. Maybe the atmosphere was tight down front as Steve sang his activist songs like “John Walker’s Blues” and “Jerusalem” (“I’m just going to keep singing it until it comes true”) but I wasn’t having the best of times.

Then there was radical change as the second half formed around his latest: “Washington Square Serenade”. Steve picked at a lone banjo as the Pro-Tools generated booming hip-hop beats of the album were replaced by a live scratching DJ. At that point I had yet to hear the album (soon remedied), but it was intoxicating. Even the scenesters perked up their ears. There was now enough space for me to work my way down closer, and half the audience was starting to dance – a remarkable shift in mood as darkness beckoned. Only for a few moments on “Way Down in the Hole” did the rhythms not gel. Allison Moorer came out to join this odd duo for “Days Aren’t Long Enough”. Steve was determined to play a full set as planned, and before the encore invited anti-war activist and Congressional candidate Cindy Sheehan to make a one line speech: “Bring our troops home, impeach George Bush and Dick Cheney, and vote for me!”. I thought Steve had turned it around, and I went home more than happy, but really the whole weekend was about one artist for me and I walked home in anticipation of what might await tomorrow.

Look out for our review of Day Three tomorrow…