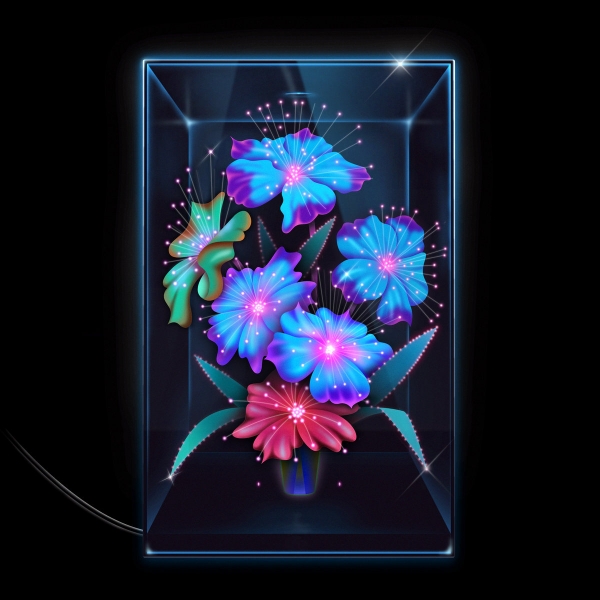 For fans of Xenia Rubinos’ 2016 album Black Terry Cat, the wait for new material has been long. That record is one of the hidden gems of the last decade; a unique blend of jazz vocals with electronics and funk, with one on eye on hispanic culture which, born of Puerto Rican and Cuban parents, she was raised in. The music was colourful and instantaneous, and she seemed on the cusp of an exciting breakout; reshaping notions of how a Latinx musician can sound in the process. But a long break followed. On her comeback album, Una Rosa, there’s a deeper embrace of the sounds of her family and childhood, but the music itself is so radically different, so electronic and freaky, that those looking for more of the same will be left waiting regardless.

Una Rosa is a successful step in a wildly new direction. While her previous work seemed emotionally confessional, here Rubinos steps back and goes theatrical: cosplaying as the melodramatic divas and lounge singers like Lucilla Villa who were played around her house as a child. On "Ay Hombre" she sounds like she’s prowling around a dusty jazz bar, draping herself over pianos and dragging a cigarillo between lines. The accompanying instrumental is miles from that setting though, her vocals doused in autotune and backed by thick 808s. The delicate "Una Rosa" goes deeper still, based around a melody which played from a wind-up lamp in her abuelita’s bedroom but reimagined with woodwinds and escalating synths.

Because the album is heavily inspired by artists unfamiliar to most English ears, it can take a little while to understand the creativeness of Rubinos’ reinventions. But, once you’re in, you’re in, and sound of Una Rosa feels like almost futuristic as a result. Take "Sacude" -her interpretation of the Cuban rumba mode - which retains the infectious chant melodies and claves traditional to the sound but replaces any acoustic percussion with hi-hats and a thick, rubbery bass-line.

Not that you need to take a history lesson to appreciate the music. You don’t need to know a jot about the artists Rubinos was raised on to be taken in by the clattering drums of "Congelo Suave" or the sensuality of "Si Llego". "Working All The Time’ deploys a universal theme too: a glitchy ode to the crushing tedium of working inane jobs for shitty paycheques. Pair this with the indigent anger of "Who Shot Ya", a rebuttal of police brutality, seething until it breaks down completely in its final moments.

As an artist who performs in half a dozen styles, it doesn’t need to be said that Rubinos is not a hispanic artist, but simply an artist, plain and simple. Yet she does say so, beautifully, on "Don’t Put Me In Red". Based on her experience at shows, when lighting engineers would hear her name and automatically light the stage in red without thinking to ask her first, the ballad is a pained and heartfelt rejection of the box others have tried to put her in. Una Rosa is a testament to that. She didn’t make a record expected of her even by fans of her last LP and, in doing so, has produced something which is strange, chaotic and utterly her own.