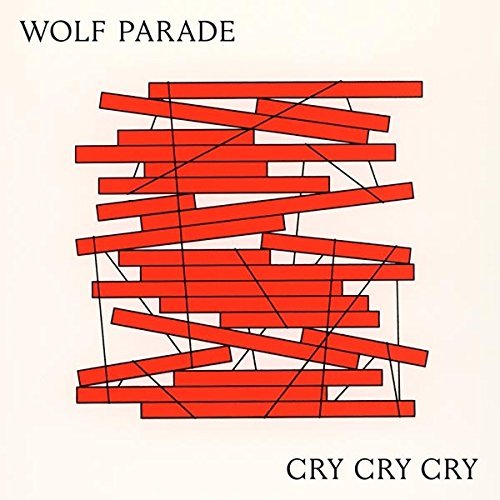 Following the release of their critically acclaimed third record, Expo ‘86, Canadian veterans Wolf Parade embarked on an indefinite hiatus, with each member focussing their attention towards separate musical projects.

Eventually, three of the group’s four members found themselves back on Vancouver Island, with vocalist Dan Boeckner on the mainland in Northern California. Seemingly, not even on an island with a population sparser than that of Alaska could the seismic shifts of 2016 be ignored. It almost seems as if the chaos of 2016, it's political and cultural shifts, and the loss of some of music’s all-time greats were simply too loud for Wolf Parade’s silence to continue.

As with the band’s previous work, Spencer Krug and Dan Boeckner have shared vocal and lyrical duties. What is apparent throughout Cry Cry Cry is that both men’s writing has been informed by the same cultural and political moment. Indeed, the title of the album aptly summarises the two musician’s perception of the state of contemporary North America, if not the world.

Second track “You're Dreaming”, a driving pop number gleaned with shiny synths and polished guitar, considers the difficulty of coming to terms with the disintegration of the established political landscape and its replacement with yellow-haired farce. “I don't wanna live here anymore” exclaims Boeckner. The song tries to come to terms with the reality of “every system in collapse”, yet as the title suggests, it is difficult to even accept that the regression sparked by the 2016 presidential election is anything but a nightmare.

Similarly, the single “Valley Boy”, for which Krug wrote the lyrics following the death of compatriot Leonard Cohen and the election of Trump, plays out like a desperate conversation with Cohen: “The radio’s been playing all your songs...Did you know it was all gonna go wrong?” It seems for Krug, Cohen knew something was amiss as he “slipped away up the stairs”. Lyrically, the song brilliantly and succinctly captures a moment where people will be able to recall where they heard the news for years to come. Musically, the arrangement is undeniably Bowie-tinged with glam, with Krug’s vocals reminiscent of another great to have been taken by 2016, making “Valley Boy” a standout number on the record.

Vulnerable and displaced populations are considered in “Artificial Life”, another overtly political moment on the record. The track seeks to elucidate growing inequality in a time of unprecedented prosperity: “They've got everything/ But that everything was not meant for you and me”. With the migrant crisis in mind, the track becomes increasingly pertinent as Krug sings “If the flood should ever come / We’ll be the last in the lifeboat”. As the album’s penultimate track, “Artificial Life” only reinforces the LP’s status as a genuinely reactionary and considered work.

Despite the clear global themes that run throughout Cry Cry Cry, the album is not without its personal, more intimate moments.

“Baby Blue” opens with echoes of Ray Manzarek while surrounded by tight indie arrangement. There is a moving nostalgia present in the lyrics: “Take me back in time/ Back to Montreal / Slow dancing by the kitchen table”. The song conveys a refreshing and relatable intimacy, while remaining consistent with the overall theme of the record as it yearns for a time past. Clocking in at over six minutes, swirling, heady guitar interludes leave space to construct an intensity that will undoubtedly allow for an incredibly potent live rendition of the track.

Cry Cry Cry is a record whose true strength lies in its lyrics, and the context from which it has emerged. It can easily be viewed as an important piece of contemporary commentary.

Instrumentally, it has its captivating moments. “Weaponized”, in true Wolf Parade fashion is a prog rock epic, containing spacey, spiralling synths .While “Who Are Ya?” is an arresting and urgent track, lyrically acerbic, bouncing around to somehow create a hectic yet finely tuned piece of music.

Undoubtedly, this record is destined to be performed in massive arenas. Musically, it is not quite extraordinary, yet this could all change in a live setting, and it remains a more than worthy return for a group who are experts in their craft.