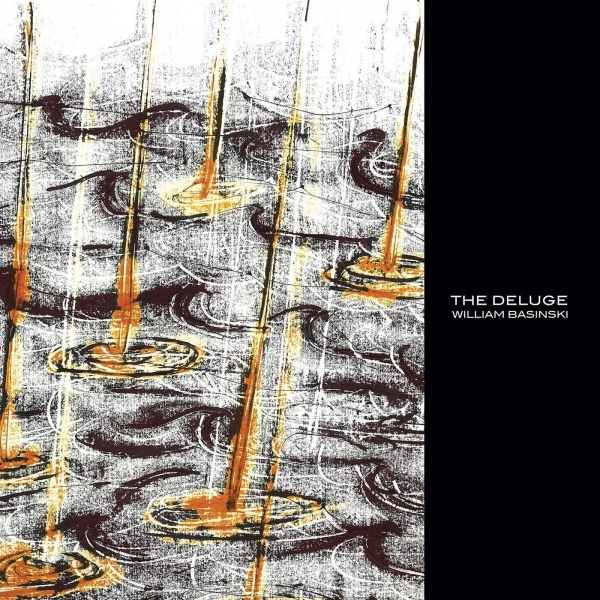 With his career-long meditation on recollection and recurrent endings, William Basinski has spent almost forty years excavating profound grace from the whims and workings of decay and depreciation.

Cresting on his seminal four-volume album The Disintegration Loops – a poignant masterstroke constructed from the degeneration of twenty-year-old tapes of his early stirrings – his work is steeped in a deep-seated preoccupation with the mystery of time and the imprint of melancholy on memory. Like the eternal stand-off between nature and nation in Hokusai's The Great Wave, Basinski’s experimental ambient oeuvre has relayed majesty in suspended motion and deliverance in the lurking jaws of defeat.

The live manifestation of Cascade – a swirling, placatory “new” work featuring a piano loop first recorded back in 1982 – The Deluge sees Basinski advance from composer to producer to phantom conductor, teasing the ghost of the former release and morphing its coiling phrases beyond recognition by filtering them through varyingly-sized feedback loops at Brooklyn's Issue Project Room. Lauded by many as a sort of postmodern sacred minimalist, Basinski’s recontextualisation here does nothing to supress that view, conjuring a work of sprinkling drone that simultaneously evokes Woolf’s “incessant shower of innumerable atoms” and Burroughs’ “sound and image flakes falling like luminous grey snow—falling softly from demagnetized patterns into blue silence.”

As he might well be inclined to agree, first impressions mean next to nothing when it comes to Basinski’s incremental sorcery. Just as the enduring attraction of The Disintegration Loops is heavily dependent on the explication of its falloff, the title track proves little more than a curiosity until just over eight minutes in. At first, a fluttering string of punch-drunk piano notes, encircling ever-thick like a flourishing curl of mist, it gradually yields to the might of feedback as panned heaves of drone all but swallow the initial stratum of piano loops whole. By way of the certain capitulation of sound and the steady meddling of reiteration, Basinski conjures an Orphée-like netherworld from the echelons of time, where echoes network and branches of noise bound and dissipate once more.

Serving as an epilogue to the twenty-minute title track and a bridge to the closing of the triptych, “The Deluge (Denouement)” is – despite its self-explanatory title – something of a curveball. Birthing on a familiar stream of twinkling piano notes reminiscent of the brooding ambience of Japanese video game composer Akira Yamaoka and Basinski’s own Melancholia, it abruptly colours from its mournful haze to reveal crackling gramophone hiss and a dramatic orchestral theme of the early twentieth century on loop. A sublime, altogether unforeseen sliver of drone-layered Musique Concrete, it summons images of forsaken wartime dancehalls solely governed by hidden spectres confined within the walls.

Irremovable from his immersion in recurrent endings, Basinski’s predisposition towards recurrent beginnings ensures The Deluge returns to the womb in fitting fashion. Whilst it may be easy to call it a cop-out – that is, all too easy – choosing to end on an eleven-minute, faded-out version of the original “Cascade” proves
an extremely astute resolution and yet another permutation of Basinski’s persistent compulsion to create, re-create and return. While some previous releases have felt more momentous and genre-defining, The Deluge feels like a necessary purgative journey, where the past is almost due a writing credit.

If Graeme Greene’s “a story has no beginning or end: arbitrarily one chooses that moment of experience from which to look back or from which to look ahead” holds sway, one can’t help but view Basinski’s “arbitrariness” to be akin to the art of caprice.