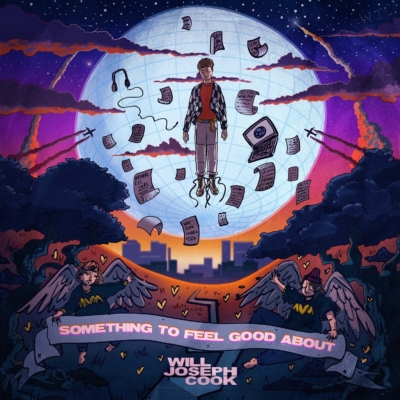 The title of Will Joseph Cook’s second album Something To Feel Good About really could not be more apt.

Not just because of the year we’ve had - and our collective need for a form of escapism - but because the album is simply filled to the brim with feel-good wonder. Following on from the joyful bounce of 2017 debut Sweet Dreamer, Something to Feel Good About is indie-pop with added emotion. While Sweet Dreamer was a carefree portrayal of teenage life, Something to Feel Good About tells the tale of a 21-year-old Cook trying to work things out.

And while the melodies are still sweet and summery, the stories behind the songs are a lot more serious. First single “Driverless Cars” sets the tone for the remainder of the album, expressing the bending between exuberance and pessimism. There is a sense of a tale of two halves with this album. The first being home to the more intoxicating songs; the songs that radiate a hedonistic energy. “Be Around Me” with its dizzy guitar spin tells of the excitement of falling for someone whilst also being aware of the risk of getting hurt. Title track “Something to Feel Good About” carries an optimistic sway with opening lyrics “You think you might have lost your job / but you don’t even like it”.

The second half of the album, however, focuses on reflection, with “DOWNDOWNDOWN!” detailing how to deal with heartbreak, with the added hook-up mention in the chorus. But, all of the emotion lies within “21”, with the utterly relatable line “I don’t know anyone who’s 21 and knows how to feel” and also in the personal letter and album closer “Last Year”.

On Cook’s latest offering, he has learnt how to dance confidently whilst also being able to deal with his vulnerabilities. Something to Feel Good About features the off-kilter indie-pop he is so good at creating in abundance, with an added sense of reality.