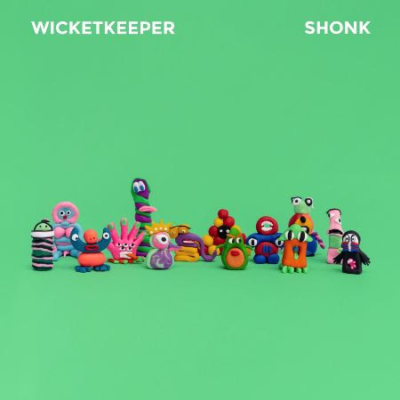 Shonk, the debut album from London/Margate trio Wicketkeeper, is an unrelenting 42 minute ode to fuzz.

Divided into 14 brilliant short, sharp slices Shonk delivers non-stop thrashing, snare kicking, no shit giving fast paced guitar pop. It’s the sound of the house parties of your youth; of blurred vision and limbs flailing to the beat; of warm summer days knocking around with your best friends. In other words, it’s endearingly joyful, ridiculously catchy and a much needed antidote for the oncoming winter blues.

Drawn from a collection of over 50 songs and distilled over 2 days live recording at the Gun Factory in Homerton with producer Lindsay Corstorphine, Shonk’s thrillingly ramshackle and carefree sound is reflective of the band’s origins and DIY energy. It’s the sound of two brothers (Simon and Alex Morley) and three friends (Ryan Oxley) getting together with no plan other than to make each other smile, plug in and see what happened. In Oxley’s own words, “It’s still those same three friends, those same three smiles, just now with 14 songs (and some). From the practice room to the, well, practice room.”

The album’s short playful interludes “Wired” and “Tired” are not only a homage to this energy but to the ever changing pace of Shonk - the songs exist as a dyad, “Tired” being the slower version of “Wired.” From the wired corner of the album we have harder edged punk numbers like “Night Night”, which provides a raucous anthem for disaffected youth, and “I Can’t Believe”’s wildy infectious rhythms (honestly, try not to tap your feet and nod your head). From the tired corner we have the grooving bass lines of “Modest Breakfast” and “Bodies”, though both still pack a considerable punch.

From album opener and previous single “A Lot To Lose” to closing number “Cigarettes” Wicketkeeper deliver captivating, warm, partly-Sebadoh inspired, American slacker rock but undercut with a distinctly British sense of humour and perspective. Lines like “I spend my money on cigarettes / I don’t smoke but I invest” from the latter and “I’m flat broke but deal me in” from the deliciously threatening “Feelings” are delivered with such a wry nod.

That’s one key thing about Shonk that sets it apart and lights a fire under the belly of its laidback sound - even though the lyrical refrains are fairly simple, they are actually also incredibly smart and perfectly observational (just like how even though the style is incredibly loose it’s also very focussed). Nowhere is that more evident than on their latest single “I Can’t Believe”: “Everything we wanna see / We’ll probably never see. Everything we wanna be / We’ll probably never be ... I can’t believe / We’re still getting older”

Thrashy, guitar-pop at its finest then? We think so.