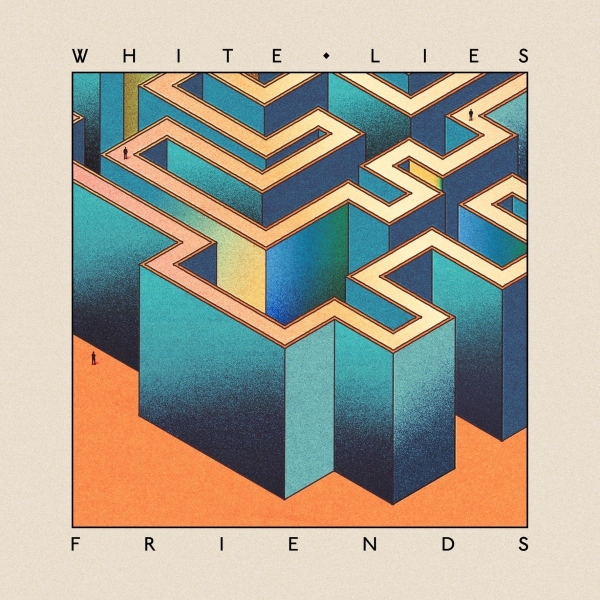 Perhaps, for White Lies, it was a case of the difficult third album, rather than the second.

After all, it was on 2013’s Big TV that they found themselves up against it, with credibility to claw back. Its predecessor, Ritual, was a strange album; it overwhelmingly gave off the impression of a band who seemed surprised that they’d even gotten to make a second record. That in itself was bizarre, given that the chart-topping success of their debut, To Lose My Life..., seemed like a self-fulfilling prophecy. It was a polished, commercially-viable rock record full of big hooks and choruses. It came out in the release wasteland of January, meaning it was effectively unopposed for the top spot. It was aggressively advertised by their major label all the same. Still, it carried off its remit with verve and assurance, which is why the comparative exercise in water-treading that followed in 2011 was so peculiar.

Big TV, then, had the Londoners ostensibly playing to their strengths, doubling down on their synth-heavy instrumental palette, nodding more obviously than before to their chart-friendlier influences (Depeche Mode, Tears for Fears) and lyrically shooting for a loose concept based around young lovers, which was actually done quite neatly. Somewhere along the line, though, the aspect of their music that had characterised them more than any other around the time of their debut’s release seemed to have dissipated. The gloom that permeated every aspect of To Lose My Life... wasn’t just about wearing all black on stage or shooting goth-flecked music videos; there was a tension and paranoia to the album’s obsession with mortality that was duly reflected in the thick, brooding atmosphere the trio drummed up. As soon as they began to back away from that approach, they lost what made them stand out.

And now, on Friends, there’s little sign that they’re any closer to reclaiming it. This fourth album was written in between the expiration of their last record deal and the signing of their new one, which on paper was supposed to ease the pressure and free up the band creatively. That so many of the tracks here feel so lackadaisical suggests that move backfired. It was the sharp ear for hooks and melodies that saved them on Big TV but it very much feels as if that particular well is beginning to run dry now; “Don’t Want to Feel It All” shoots for minimalism but ends up trudging, and on the awkward “Come On”, the guitars and they keys trip over each other.

Plenty’s been made in the build-up to this release about the fact that, in places, White Lies have gone disco here. That’s not strictly true - instead, they’ve cherry-picked bits and pieces from the Eighties across the span of the record, and it feels like more of an aesthetic shift than a structural one - the particular synth sounds used on “Hold Back Your Love” and “Is My Love Enough?”, for instance, songs which don’t otherwise deviate wildly from the tried-and-true White Lies formula. The one real exception is also the album’s standout, the terrific “Swing”, which doesn’t just mine new territory with its irresistible groove - it also harkens back to To Lose My Life... with more than a touch of menace to Harry McVeigh’s vocals.

McVeigh’s talents as a singer are considerable and, for the most part, it feels as if they go underused on Friends, partly because the arrangements seldom call for him to really soar and partly because bassist Charles Cave fails to provide him with much in the way of inspired lyricism. The album’s title apparently stems from a changing attitude to friendship with advancing age, but any opportunity that might have offered up for a treatise on maturity and stability as the band leave their twenties behind fails to materialise. Consequently, Friends is White Lies’ least inspiring record both musically and thematically; they appear to be back in identity crisis mode, and it might not be recoverable this time around.