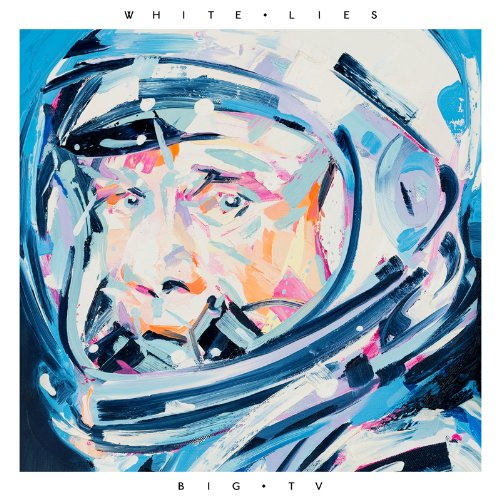 The year is 1985. The Breakfast Club is still in theaters. Simple Minds’ ‘Don’t You (Forgot About Me)’ is all over the radio. Tears for Fears put out Songs from the Big Chair, The Cure release The Head on the Door, and The Thompson Twins continue to forge pop gold with Here’s to Future Days. MTV is new and exciting and airing videos by the likes of Adam Ant, Psychedelic Furs, and Duran Duran. Every heart is pinned on a sleeve, and it’s okay to be sad.

As far as White Lies is concerned, this is all still the case. And with their third album, Big TV, the band goes a level deeper into the decade, tests its fabric, and brings back more than just the topicals.

Critics from Rolling Stone to Pitchfork unanimously ganged up on their previous effort, 2011’s Rituals, and condemned it for being more-or-less a ‘downer’ of an album–as if that’s has any bearing on how good the music is. (It’s amazing to see how much more of a bearing groupthink can have on a review, over intrinsic emotional appeal). Rituals was a second helping of the kind of sulk-friendly anthems the band clearly set out to make from the get-go. If you don’t happen to like embracing despair on occasion, there are plenty of other bands in the sea.

It’s fair to report that White Lies wear their influences just beside their sleeve-pinned hearts. But that shouldn’t be a criticism. After all, David Bowie never tried to cover up how much on an influence The Velvet Underground had on his songwriting (amongst others). Which is to say, you can be influential and deeply-influenced at the same time.

Don’t get sucked into the conspiring hate-trap. This band is achieving glorious things, and only going higher and bigger with each subsequent album. (Fact: Ritual made it to number three on the UK album chart). Big TV is very conceptual, and it appears clear that the band spent a lot of time fine-tuning the atmospherics, beyond just the songwriting. While the collective atmosphere is all-80s-all-the-time, which goes for the brilliantly-fitting album art, there is a consistent level of sonic depth that seems bent on making this album feel like it was exhumed from a Reagan-era time capsule. Otherwise the use of ‘outdated’ pop conventions – pitchy synthesizers, dense reverb-soaked walls of mixed noise, twinkling piano keys – the album’s unabashed romanticism is given a level of saturation fit for the most romantic decade of them all. And the album’s most engorged track is also its shining outlier: ‘Change’ is a breathless, dazzling beauty which swells to the type of stratosphere Sigur Ros visits on weekends.

So while White Lies continue to dig into their 80s-centric record collection, they do manage to fish out a few more upbeat reference points this time around. For instance, ‘Be Your Man’ glides on synth flourishes and wailing vocals that recall hey-day Simple Minds. Another reference that seems to crop up quite a bit is Flock of Seagulls, whose stadium-scale new wave has found hospitable lodging in the band’s sonic repertoire. Just listen to the chorus of ‘Tricky to Love’, which pairs rock-riffing with tender-tinkering, and incidentally borrows a vocal cadence from ‘I Ran (So Far Away)’.

But with influences visible, nods clearly marked, White Lies aren’t just repackaging yesterday’s hits as their own. Instead they’re making use of abandoned utensils to create anew, achieving catharsis through resourcefulness. Yes, they are working with a previously-explored aesthetic, but they are molding it into a beautifully-original product, per a vision that refuses to forget music’s former greatness. Ever notice how rarely the ‘seen-it-done-it’ criticism is applied to every ‘new’ pop song that breaks out the ol’ dubstep ‘womp-womp’? Perhaps there’s actually a valid reason some bands opt for a sound far-removed from the radioscape of the 2010s…

The music standards of today insist upon the here and now, and discarding anything and everything that surpasses such a blinking shelf life. Appreciating the past equates to trash-picking. That being so, White Lies should make dumpster-divers out of every one of our filthy souls. All it takes is some emotional honesty and a thought or two outside the pack.