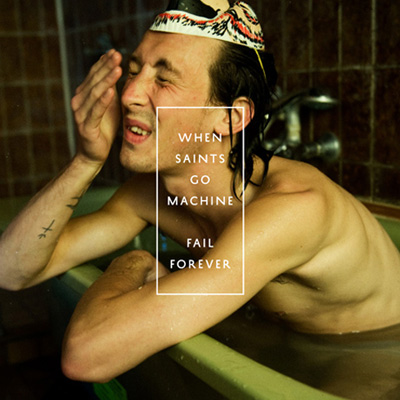 When Saints Go Machine have produced something very striking and just a little out of the ordinary. Over five tracks this mini-album captures some really interesting sonic atmospheres. Arriving from a similar angle as Miike Snow did back in 2009, When Saints Go Machine manage to infiltrate their particular sub-section of dance with haunting atmospherics and ghostly vocals. In fact it wouldn’t be too much of a stretch to compare Nikolaj Manuel Vonsild’s vocals to a less-theatrical Anthony Hegarty in the way that they both manage to synthesise soul and space. The other-worldly is always persistent, lurking in the dark corners of layered synth, or in thick gluts of reverb. In a similar way this record echoes haunting evocations of Arthur Russell’s World of Echo, which seems to have struck a chord with the group. This is best seen in the title track ‘Fail Forever’ which makes liberal use of effected Cello sounds. Its primary effect is to dwarf the record in a dense hypnagogic environment, detaching the listener from his surroundings and placing him in a trance. Of course the real atmospheric beauty of such music creates dislocation, the loosening of spatial awareness, causing a transient, momentary glimpse at the deeper parts of the human soul. All art should, if it is well aimed, put us in some heightened state, as if we are under the spell of psychotropic drugs, connecting us to the trembling waves of energy emanating from all things. As if by magic, When Saints Go Machine focus their energies concisely, and the result is quite wonderful.

‘Pick Up Your Tears And Run’ sees the band broaden the scope. Beats seemingly derived from Salem’s unholy box of tricks add an urbanised element to the record. Similarly the following track, ‘Pinned’, puts us in New York in the mid 80s, utilising police sirens and a burgeoning sense of unrest to cause displaced fears to run through us nervously. Rather comically, and somewhat tangentially, the vocal melodies of the verse are quite strongly reminiscent of Men at Work’s ‘Land Down Under’. Fortunately for the band though, this makes the song seem somehow familiar, drawing us into the eighties and beyond as we search to find connections between the information given to us. From this absurdity though, we find new meaning, as the familiar becomes renewed and refreshed and given new life in a new century.

‘You Or The Gang’ finds the band at their most dramatic and suitably, their most ethereal. The track builds and builds to a crescendo of competing cellos, beatific vocals and one persistent beat. It is also one of the highlights of the album and sees them rendering some tricks of Miike Snow’s, most notably when the beats drops out at the beginning of the chorus, allowing the melody to sit within a wash of synth. All the way through this moment a metronomic synth-bassline hides itself deep in the mix, only coming apparent as the chorus increases in volume and intensity, all to stunning effect. On ‘Greys And Blues’, the mini-album closer, a different approach is used. Intensity finds itself coming out in the vocals, and concurrently, the backing vocals. The only real shame is that at 01:46 the song is painfully short. By the time my interest peaked, the universe in which I inhabited had come to an end, it’s story only just begun. This too becomes the story of the mini-album. What you have here is a very worthy tale, and one which will no doubt serve as a great introduction for the band, although what we really long for is an album of these separate universes, so that we can truly lose ourselves.