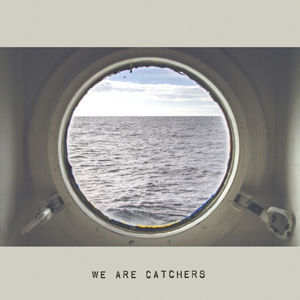 Imagine yourself sat on top of Liverpool’s Royal Liver Building during a British Summer, beneath grey clouds and their inevitable downpour. Between each drop the beats of many a historical act still pouring from The Cavern Club behind you from times gone by: The stories of McCartney, the strums of The La’s, the sunshine of The Coral. But in front of you, a sea of white sand and a sky of blue sea, with waves that switch from crashes to crawls; all lapping those iconic docks, bringing with them drips of Californian sunshine in the form of Beach Boys-esque harmonies and ballads in the key of Brian Wilson. This is We Are Catchers’ debut album, from singer/songwriter Peter Jackson. While his namesake is famous for epically scaled, IMAX moments, We Are Catchers captures modern memories played through the grainy sets of old.

In many ways it’s a simple record, favouring technique over technology and to-the-point lyrics rather than those that miss the point completely. Jackson’s chunky, confident piano leads the entire collection; a rolling rhythm, accompanied by classic percussion and allowing for those sun-soaked, breezy harmonies to be take a step closer to centre stage than backing vocals are usually allowed. The inclusion of sleigh bells on “If You Decide” adds a festive feel to an otherwise melancholy moment, which wouldn’t sound out of place on Richard Curtis’ next terribly awkward but nevertheless absolutely romantic comedy. “Isabella” follows a similar style, as Jackson sings “forget the memories we share, the future isn’t there” through a wall of sound with an undeniably smooth finish.

Lead single “Tap Tap Tap” is drenched in equal parts Old Blighty rain and ocean spray, while opener “Water’s Edge” is another fine example of that wall-of-sound style production. While Spector’s technique might not have worked for The Beatles, We Are Catchers climb it and walk along with arms spread out, swaying between the two continents and their decades of popular music-filled histories on either side. With his Scouse twang audible during certain moments, it’s almost as if John Power picked up a piano instead of a guitar and never looked back, while elsewhere Jackson ivory punching could make him one of Elvis Costello’s “boys from the Mersey”.

A nod to Liverpool’s indie scene can be picked up even more so on “The Fear” and “Richer Man”, as the LP takes a more pessimistic turn for the flipside (particularly on “Over The Hill” and “If I Fell”). The influence is only natural, with ex-Coral guitarist Bill Ryder-Jones joining Jackson in the studio. While it’s not quite the psychedelic-tinged sunshine of “In The Morning” that came from the sessions, they make for more typically British moments, particularly the outro of “Richer Man”: “I was just a working man and you’re in demand, so you can keep your country pad and I’ll dig your land.” Closer “Where Are We?” – with the harmonies layered up, perhaps to protect from the cold – adds an open-ending to the album, with the answer seemingly, the exact point halfway between LA and the UK.