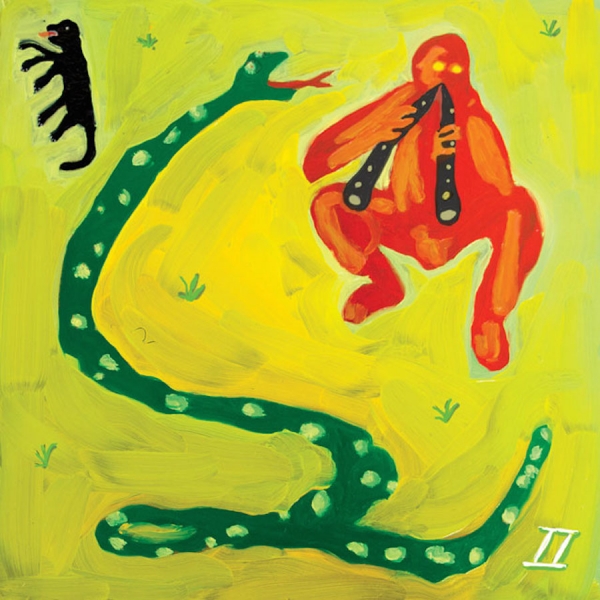 Searing synths signal the opening of the gatefold doors to 1000 Days, a record that creates and embodies a world of its own.

Wand's second release of the year may have dropped with limited fanfare, but those who seek out and venture into the soaring psychedelics of the new album find themselves in a landscape of rich tapestries and luscious melodies.

Removed from the expansive instrument-led sounds of previous records Ganglion Reef and Golem, 1000 Days immerses inwards. Strident stadium rock collides with characteristic psychedelia with a natural euphoria. The record storms and spirals all within Wand's control, constantly evolving textures transporting listeners to places newer and more vibrant than ever before.

Cory Hanson's vocals sit at the forefront of all of this, ushering enticingly over piano refrains and ensuing distortion on "Broken Sun", calling to epic choruses on "Sleepy Dog", and hypnotising into allure on lead album track "Stolen Footsteps". "I don't need a thing 'cause I've had every dream" he echoes on album title track "1000 Days", a lingering refrain that echoes poignantly with Wand's ability to make everything they do sound like a fantasy.

Venturing into tribal percussion on "Dovetail" and chainsaw-esque distortion on "Lower Order", Wand are constantly pushing the limits. Whether it's dark and menacing, screeching lyrics, or alluring acoustics, the group present it all - and never once stray from the storming high standard they've set for themselves.

"Passage Of The Dream" highlights these capabilities. At once expansive and inwardly spiralling, the track demonstrates Wand at their boldest and most anthemic. Album closer "Morning Rainbow" contrasts completely. From it's acoustic introduction and haunting vocal cries, the song builds through twinkling melodies and resounding solos. Entirely downtempo yet scorchingly enchanting, the track ushers in the next step in Wand's evolution.

What that will be, we'll have to wait and see, but if the progression so far is fair indication, no one will be left disappointed.