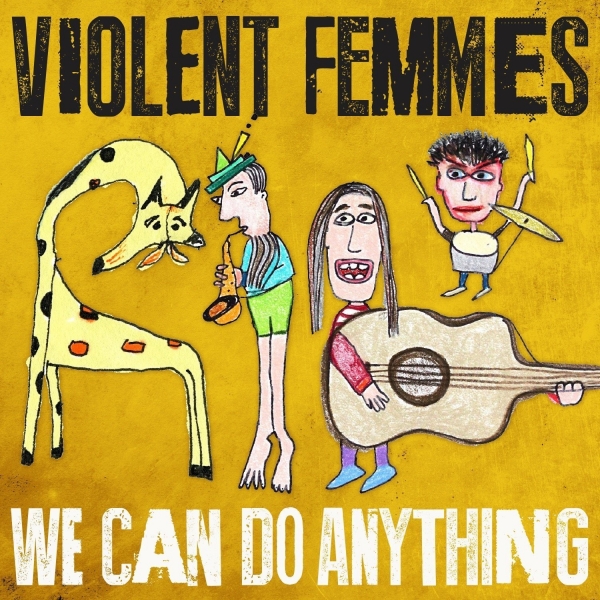 Anyone hoping Violent Femmes’ return would exhibit attempts at musical transformation might be disappointed with the band’s ninth studio album. But the record, produced by long time friend and frequenting member of the group Jeff Hamilton, is still a fun, nostalgic celebration of the laid-back acoustic-punk they created with their self-titled debut and The Blind Leading The Naked in the ‘80s.

And that’s exactly what makes We Can Do Anything so enjoyable. Like a musical scrapbook, the structural frameworks of the songs that make this album are drawn from frontman and songwriter Gordon Gano’s archive of cassette demos and lyric journals, featuring songs co-written and penned by friends and relatives, all collected over the last decade and a half.

Inevitably this threads sentimental themes throughout the album right from the start with lead single “Memory”, but on top of this, with his lyrics as sharp and playful as they ever have been, Gano tackles classic American values, religious angst and reaches a romantic peak with “What You Really Mean”, co-written by his sister Cynthia Gayneaux.

There’s also a clear intention here to re-capture the trademark spirited, care-free energy that makes every track the Violent Femmes have ever released sound like it was nailed on the first take. Amidst the occasional carnival of brass, accordions and raucous chanting provided by frequent collaborators and backing band Horns of Dilemma, charmingly simplistic slack-stringed guitar lines open “Memory”, “Issues” and “Holy Ghost”, with wildly distressed and unkempt solos waiting around the corner from every other chorus.

And through a well suited use of room mics, live tracking and the odd vocal take from Gano’s demos making the cut, Jeff Hamilton and the band have successfully fuelled We Can Do Anything with the scruffy-but-vibrant spontaneity that made all their earlier records the much loved works they are.