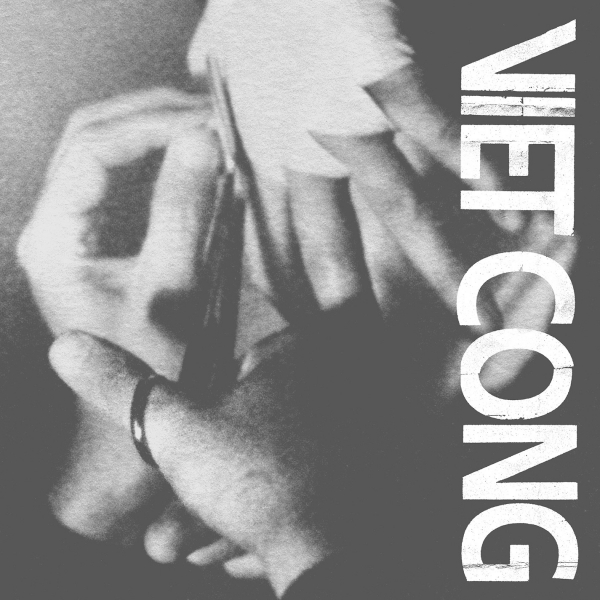 “Check your anxiety/No need to suffer silently”, or so says Matt Flegel on “Continental Shelf” thus revealing the two key themes of Viet Cong’s debut album; fear and noise. Fear of what every living person dreads in varying degrees of unease; the unshakable, inevitable end. Death is a startlingly demonstrable presence on Viet Cong. Back in 2012 Flegel’s previous band Women came to sad and sudden end with the death of guitarist Christopher Reimer. Women were one of the most exciting noise-rock bands out there and their sudden demise was a genuine heartbreaker. With this in mind its easy to understand why Viet Cong is such a richly bleak record.

From the black and white artwork, to the ice cold percussion and shrill, trebly guitars, the whole album feels distinctly frostbitten. “Newspaper Spoons” begins with thunderous, distorted drums and the opening line "Writhing violence essentially without distortion/Wired silent vanishing into the boredom", as ear-splitting, screeching guitar noise permeates the track. There is a element of Joy Division to Viet Cong’s monochrome post-punk, a metallic sheen to tracks such as "Pointless Experience" and the first half of "March of Progress", the latter also being an example of Flegel’s finesse and ambition as a songwriter. Moving from weathered drum loops and dial-tone drones, to clanging guitars and 1960s psych vocal melodies, the song springs to life at the around the four-minute 40 mark with a flourish of guitars that sound like a celebratory chorus of ringing bells.

Viet Cong is a razor sharp record, Daniel Christiansen’s guitars stab and pierce the mix. The choppy rhythm of “Bunker Buster” and coarse textures that underpin "Continental Shelf” are abrasive and give Viet Cong a harsh serrated edge. There are nods to the post-punk of the 1980s with krautrock synthesisers and dance-punk bass-lines such as on “Silhouettes”, as the track swings from darker and lighter tones as well as between nostalgic punk and modern noise-rock sensibilities.

Flegel's vocals are often as visceral as his lyrics. Sometimes delivered in a Paul Banks croon and other times succumbing to the music’s viscerous nature and surrounding himself to savage howls and screams. Whilst the music moves between brooding and tenacious, the lyrics are coloured with a thick black melancholy, "If we’re lucky we’ll get old and die" sings Flegel on “Pointless Experience”. It’s clear that Christopher Reimer’s passing haunts the album, the highlight of which is the final track, a 10-minute epic entitled “Death”. The track begins with some of the chiming guitars we’ve grown accustomed to throughout the record, but as the track intensifies and becomes thicker with noise and dread, they see out the track with a bludgeoning attack of vitriolic guitar crashes and larynx-shredding vocal cries.

There is no denying the raw power of Viet Cong, whether you are familiar with Women or not (if not, you definitely need to go away and listen to Public Strain - a modern classic), anyone with punk in their heart will connect with this album. The album as a whole seems reflective of the times we currently live in. Away from all the technological, medicinal and social advances of the age, in the forefront of our minds we are constantly (made) aware of human misery and degradation. Death is our common denominator. Death is our malefactor and great unifier. The best albums allow us to ruminate on life’s big questions, giving insight not only into the mind of the artist but reflecting the sentiments of the beholder, and Viet Cong does exactly that.