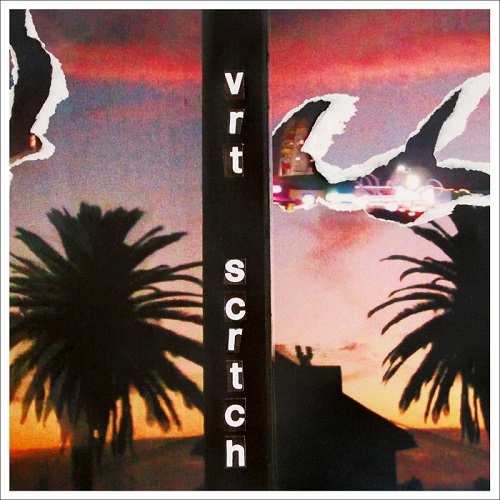 Brevity is an oft-forgotten and underappreciated quality in the arts. Perhaps it’s just me, but I’m willing to wager a good number of us find our attention spans far shorter these days and growing ever more so over time. Yeah, it’s probably all the in-your-face social media and whatnot, which we should probably chill out from time to time; nevertheless, staring down a ten-plus minute track runtime or numbingly watching that runtime clock pass the one minute, two minute, and so on mark before hearing any sort of discernable melody can prove exhausting. Just give me a couple minutes total of melody, verse, chorus, maybe a solo if you can fit one in there – and I don’t mean some sort of interlude amidst towering monoliths but, like, you know, a whole album or so of them.

Ah, enter Vertical Scratchers, the elixir to cure all your bogged-down-in-neverending-layers-of-synths ills. Interestingly enough, the duo here – ex-Brainiac John Schmersal and Christian Beaulieu, late of Triclops! – have historically dabbled in far more complicated and tech-heavy fare in their previous work, making Vertical Scratchers a conscious divergence from their past. Schmersal reveals, “we wanted to strip things down to the bare bones. Christian and I liked the idea of being able to show up anywhere with next to nothing…and be able to play these songs;” indeed, if simplicity and spontaneity are the Scratchers’ M.O., then mission accomplished. The album runs 15 tracks in just over 30 minutes with 8 of them under the two minute mark and only one relative epic, the woozy, bass-and-drums-only “Pretend U Are Free,” clocking in over three minutes.

Despite Daughter of Everything’s brief runtime, its sheer number of tracks and subgenre bending lend it a sprawling quality, not unlike Robert Pollard – who cameos on the joyously chaotic “Get Along Like U” – and Guided By Voices. While sticking strictly to guitar, bass, and drums, Schmersal and Beaulieu nevertheless churn a lot of mileage out of their limited confines. The bulk of the album leans toward turn-of-the-90s American Indie Rock, but the duo shrewdly deploys a number of stunts to keep things fresh throughout. Out of the gate, the Scratchers move from the propulsive “Wait No Longer” to the head-in-the-clouds strum along, “Turn Me Out.” Whether its varying tempo and rhythm, amping up the distortion (“Memory Shards”), or dropping the amplification entirely (the stomper, “Kingdom Come”), the pair keeps us guessing at every turn. It’s the deviations from this blueprint that, while providing some probably needed respite, fall short in comparison as they often rely on wooly-headed, meandering (yes, even in two minutes) psychedelia.

Lyrically and vocally, you often can’t hear Schmersal, or you can’t catch him – or both – and if you can, hard telling what he is on about most of the time. No matter, the fractured and shambolic nature of Schmersal’s lyrics is the ideal pairing with the album’s spastic sonic backdrop – it’s fun(!) and what lends the album its naïve charm. Perhaps “Memory Shards” is operating a bit on a meta level here as Schmersal blurts, “memory shards are shattering into my braaa-aaa-aaain;” one can easily interpret each of these songs as just that, a “memory shard.” However, the verbal message, if one is even to be found, in Daughter of Everything isn’t the point; it’s two grizzled veterans from the dogged fringes of Indie Rock casting off their former sonic trappings and reveling in the simple, basic, and pure.

So, Daughter of Everything’s whirlwind 15 tracks definitely won’t remediate my attention issues – hell, I clicked away from writing this review literally dozens of times! – but hey, I’m cool with that, gimme 15 more…