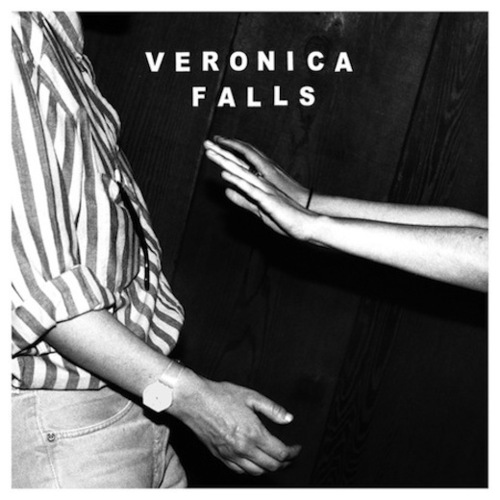 First things first. Veronica Falls’ first album was great fun: twelve medicinal earworms laced with C86-ified sugar, and pretty addictive to boot. As second efforts go, this one here is more than decent, but the trouble with Waiting For Something To Happen is hinted at within the title itself – that selfish bugger known as life has a tendency to happen while you’re sat around waiting for it.

From the breezy chimes of ‘Tell Me Everything’’s opening riff, it’s clear that things aren’t quite the same this time round. Two years ago the band were still goofing around in the graveyard and meditating on misery, whilst rocking up a storm with giddy abandon. They weren’t fooling anybody with that mock-goth routine, and they very audibly knew it. But it was still part of the charm to imagine them declaring their love to headstones – “I’m broken-hearted/Dearly departed” they sang, and from the keening sincerity of the delivery, you just knew they were too smart and too funny to be totally serious.

This record sees them older but less confident in their wisdom; drowning in relationships and mystified by the strange, terrifying responsibility of adulthood. The jangling lament of ‘Teenage’ coasts along on a lilting powerpop hook, apparently longing for the honest simplicity of adolescent infatuation. “Driving home at night/I let you listen to the music you like/Then I’ll drop you home” goes the chorus, sounding for all the world like they can’t decide whether this represents an innocent ideal or a tragic reflection on the complication of adult romance. It’s quietly beautiful, but indicative of the once-assured playfulness fading into mid-twenties mopery. A universal sentiment, sure; it just already happens to be a very-well-documented one, especially in the world of guitar-led indiepop. Another aspect of the first album’s appeal was the way the band’s apparent influences (Postcard Records, Velvet Underground, Primitives… you know the drill) made the songs feel so familiar, but there’s a difference between the comfort of familiarity and played-out banality.

Elsewhere they’re “waiting for a shooting star to fall”, or just plain “broken”. Their hearts “beat so slowly”. They’re lost and confused, wondering what happened to the promises life made them and why there’s no-one to point them in the right direction. You might call this growing up, but there’s no sense of supposedly-adult ideas like resolution or acceptance; just bewilderment and sorrow. This is echoed in the music too – where there used to be malevolent strafes of Wedding Present strums, there are now tasteful melodic jangles, mirroring the lyrical switch from brash to melancholy. There’s still plenty to bewitch the listener, particularly if your shelves are stacked with the likes of, say, The Darling Buds, Kirsty MacColl or Allo Darlin’, but it’s a more refined approach, shall we say. And we all know that a more refined approach lends itself pretty nicely to Radio 2. That’s only a problem if you want it to be, but still – Veronica Falls ain’t the band they were in 2010, and it’s hard to escape your own shadow.

Let’s be clear: Waiting For Something To Happen is still a darn good pop record with hooks a-plenty and songs you won’t be able to shake loose for days after you first hear them (‘Broken Toy’ and ‘Buried Alive’ are particularly magical in that regard). You should treasure the time you spend in its company. In years to come, it’ll come up in boozy, dusty-eyed conversations and you’ll look back fondly, maybe with a nostalgic sniff and a warm smile. But unlike that wonderful debut, you won’t carry its photo round in your wallet for the rest of your life.