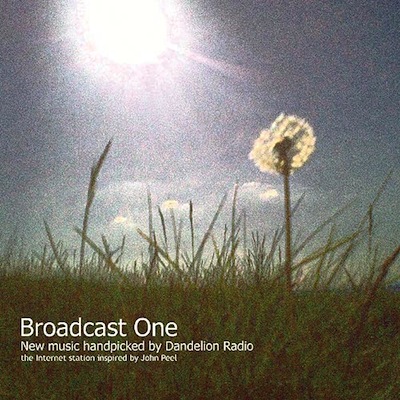 It’s impossible to overstate the lasting legacy John Peel left on the UK music landscape. He inspired legions of musos – architects, purveyors and critics alike – to seek out and create the sounds they love. He presented a wholly inclusive viewpoint, that good music was good music, regardless of colour, code or creed. Subsequently, his Radio One sessions often became schizophrenic affairs: splicing the latest movements in underground electronica with garage rock and hip hop.

Dandelion Radio was established in the spirit of Peel in 2006 and picked up where Peel left off: by introducing its listeners to music they probably wouldn’t have heard otherwise. It’s an alternative that’s certainly more overlooked in this day and age, but one that should be applauded, nonetheless. Broadcast One is an attempt to capture their raison d’être on disc. It’s a thirteen track, chaotic, incoherent cross section of Dandelion at four. The great man would surely have approved.

Each of the station’s djs has contributed a track, the majority of them recorded on their own Dandelion Radio Sessions. The compilation is erratic and often feels random. But since “making it up as they go along” is a huge part of their ethos, it’s hardly surprising. The opening one-two combo of Rachel & The Lawn Growers’ folk noir, Nico inspired ‘Rain Again’ and the subdued Jorg’s German dub electronica of ‘Non Stop Luck’ set the tone. They couldn’t have paired two more dissimilar tracks and of course, it sounds somewhat incongruent. But this is Dandelion Radio, just as it was John Peel.

For the sake of highlighting the sheer breadth of music played on the station, I’m sure Dandelion were keen to mix things up, genre wise. That said, there are some tracks which seem to have earned their place on the compilation more than others. ‘I Like Birds and I Like Other Animals Too’ is a superb slice of pop-punk from The Lovely Eggs. Ed Askew & Steve Gunn provide a star turn on the pared-back, reflective ‘When I Arrive’. ‘Black Hand’ by Atomizer provides a Cut Copy-esque change of pace and standout moments emerge throughout the record.

But Broadcast One and Dandelion Radio are not really about rationality. Nor are they too concerned with mixing, production or sequencing. They’re about providing a service that could well have been lost with the departure of John Peel. They’re about offering a podium – an international podium – to erstwhile unheralded acts. They provide listeners with an essential alternative to commercial radio and even to the more “indie-friendly” stations like 6 Music. In this case, the whole is arguably more vital than the parts. In buying this album, you’re helping to sustain an institution founded floating somewhere on the North Sea, on a cold day in 1967.