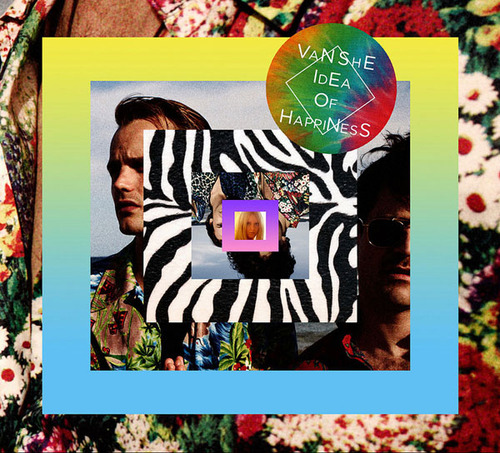 Back in 2008, Van She made a name for themselves as being Australia’s second biggest electro-pop export after Cut Copy with their debut album V. Not that their standing mattered really; this was a time when jolty melodic synths were coming from almost every corner of the globe. So while they spawned the intoxicating, ‘80s channelling singles ‘Changes’, ‘Strangers’ and ‘Kelly’, there was no suggestion that they would change the world with dance in the same way as Orbital or Daft Punk. They were on an even keel with the rest, not above or beyond, just molding into a general indistinguishable form.

Some bands make music just because they enjoy doing so; they aren’t out to fulfil a grandiose prophecy. Without assuming Van She’s collective philosophy, they definitely don’t make music that strikes a revolutionary departure from the norm. Their second offering, Idea of Happiness is an album that can only be described with vague adjectives; “good” or maybe “nice”, and yet still shy of being attributed with a positive intensifier - very good it is not, quite good perhaps.

“Time just keeps on slipping away/I can feel the hands of the clock tick-tick-ticking away”. It seems only right that the album name should be taken from the opening track. It’s simple, using very simple imagery, which connects simply with a simple audience, maybe even to the point of denigration. But they do make (albeit thoughtless) dance-floor fillers: ‘Idea of Happiness’ is a good song, with its dragging hazy, low key juxtaposing with a typically typical synth-line. The lead single for the album – ‘Jamaica’ – shows more intelligence, adopting a slick steel-pan inspired line and catchy chorus hook. But this same line of direct correlation between culture and inspiration soon becomes tired. On ‘Coconuts’, steel pans are again present – because, in case you didn’t know kids, coconuts are a West Indian fruit.

Towards the end of this annoyingly aptly titled song, there is a segment of waves crashing against the shore line. Then there is also ‘Calypso’, which, with the singer’s cry of “I feel calypso” renders a feeling of emptiness and dissatisfaction at having never felt “calypso” before. Shame.

It seems that the band have made a concept album based on stereotypes, although inoffensive, maybe endearing, ultimately basic ones, that at the very least reek of condescension. But it’s just about dancing isn’t it? It’s all intended as fun and games, so maybe we’re not meant to delve too deep beneath the surface. But the fact is, it’s not difficult to pick apart this fleshless album, and while songs like ‘Sarah’ possess a good hook they aren’t strong enough to detract from the album’s graceful failings.

Van She’s Idea of Happiness is some tropical retreat, somewhere on a nondescript Caribbean Island, that is maybe based on Jamaica. Ironically the last song ‘We Move On’ is maybe the best song on the album. After some typically traumatising heartbreak it seems to be suggesting that they could be leaving their “paradise island”: “In the light/We move on”. The album closes with an exasperated shuffle that, in its last 15 seconds, leaves more to the listener’s imagination than the entire album has done before this point. As it draws to a close, though, a part of me ceases to care. I should be feeling inquisitive and hungry for more, like at the end of an episode of Sunset Beach. But rather than going round in a circle the album has been standing still, spinning on its axis and covering no new ground.