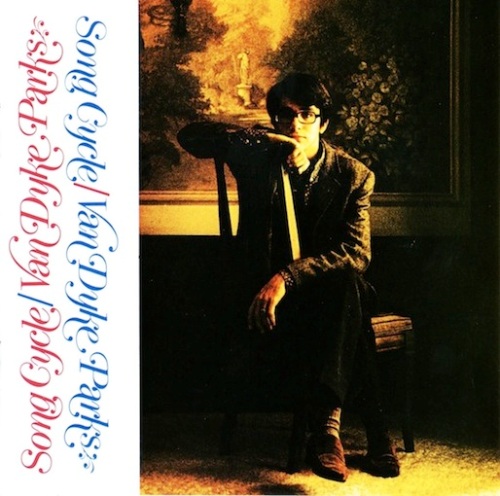 If there’s ever a competition to name the oddest piece of music ever released under the expansive banner of rock music, Van Dyke Parks’ solo debut from 1968 will almost certainly land on the podium.

Song Cycle kicks off with a snippet of traditional folk lament ‘Black Jack Davey’, but that’s where the links between the album and American roots music conventions (or any other conventions) end. An almost uncontrollable outpouring of unusual ideas characterises these 12 tracks. It’s almost as if Van Dyke Parks, having had to rein in his creative vision to service others as a lyricist, arranger, producer and session musician, had decided to blurt out everything he had to say during the album’s 30-odd minute duration, just in case he didn’t get another chance to make his own voice heard. The result is a cinematic twirl of a record that hops restlessly from one theme to another with the inexhaustible energy of a rabbit on a gallon of energy drinks.

Initially, it all sounds suspiciously like badly dated lysergic whimsy; a collection of incomputable tunes for the most blown minds of its era. Allow it a while to cohere, however, and Song Cycle soon blooms into a substantial – if slightly over-egged – slice of alternative Americana, one that eschews the commonplace country/blues/folk grit in favour of psychedelically skewered showtunes, ragtime, jazz, Disney fantasy and tin pan alley songcraft, sprinkled with occasional nods towards mud-splattered roots music. All of this is coated in soothing yet eerie arrangements so rich they practically drip with butter and cream, resulting in an album that’s simultaneously nostalgic for some imaginary past and gazing wide-eyed into the future, unmistakably of its time but also almost totally free of such constraints as era and genre.

After such an avalanche of complex, everything-all-the-time opulence, the joyful simplicity of 1972′s Discover America -mainly comprising new versions of old calypso cuts from Trinidad and Tobago, steel drums to the fore – smacks of pointless pastiche. Listen closer to these spirited takes on vintage tunes about such American figures as ‘Jack Palance’ (originally by calypso king Mighty Sparrow), FDR and J Edgar Hoover, dressed up in Van Dyke Parks’ idiosyncratic arrangements, and an interesting concept emerges: a fictional portrait of America, as seen through the eyes of outsiders brought up on the products of Hollywood dream factories. Add a drop of New Orleans-hued skanking (album highlights ‘John Jones’ and a fantastically loose take on Allen Toussaint’s ‘Occapella’), and you’ve a charming minor gem – not to mention a pioneering work of what would be later known as “world music”.

Next to this, the airbrushed calypso/Caribbean grooves and occasional nods towards smooth FM radio rock that populate 1975′s Clang of the Yankee Reaper sound disappointingly conventional. There’s good stuff here (especially the carnival exuberance of ‘Soul Train’), but the painstakingly polished ‘Love is the Answer’ suggests that by the mid ’70s, major labels such as Warner/Reprise (which originally put out these three records) were a bit more insistent on getting the occasional hit than they were around the time the blatantly non-commercial Song Cycle was put out.