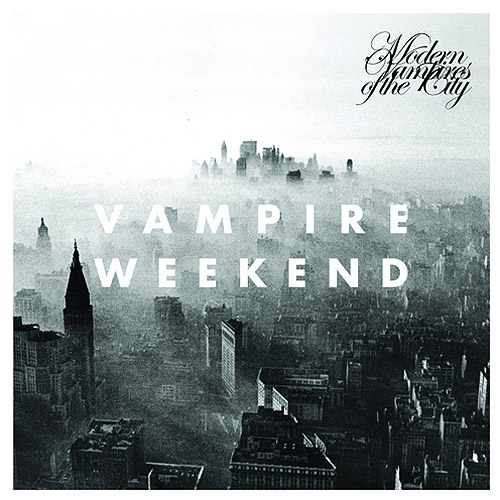 Initially so much of the discussion focused on the band’s effete image and what many saw as that image’s uncomfortable marriage to Afropop. The undeniable quality of Contra, the band’s second album, pushed the distracted talk about signifiers of privilege into the background, and now, save for the vocalising in the chorus of ‘Ya Hey’ and the ‘Graceland’ bounce of rubbery bass and drums on ‘Everlasting Arms,’ the band’s African influences are nowhere to be found either. So what now?

On their new album, Modern Vampires of The City, Vampire Weekend sound like a band in complete control. The band’s performance feels precise, the production is clean, and Ezra Koenig’s phrasing is as crisp and careful as the melodies. But like the Afropop and the phony controversy of rock music made by rich kids, the punk energy rush that gave the first two albums’ their fizz is missing. That lack of wildness makes Modern Vampires of The City, while always thoughtful and often beautiful, the least captivating of their three albums.

The band’s songwriting is still strong. ‘Step,’ the album’s first single, is a gorgeous, light sounding thing that still retains a gravity through Koenig’s slightly downbeat performance. Koenig’s voice carries the melody of the verses over simple drums and bass rhythms, before it’s joined by a pretty harpsichord on the choruses. When the band first leaked ‘Diane Young’ alongside ‘Step,’ it felt like ‘Step’s’ B-side, a throwaway experiment, but it’s a grower and eventually we realise it’s Modern Vampires of The City’s most out there track – and, on an album lacking fire, eventually becomes a stand-out. Another highlight, the stomping ‘Unbelievers,’ captures the band at its most straightforward.

Some people have compared Koenig’s vocals on the song to an Elvis impersonator, but if there is any truth to that comparison, they must be thinking of the Elvis of ‘A Little Less Conversation.’ To me, it sounds like the band’s modern, twisted take on Springsteen: A honking synth gives the song a propulsion that builds until the drums and guitar threaten to ‘Wipeout,’ while Koenig’s voice gets more modulated and abstracted with each repeated “baby.”

Modern Vampires of The City is not without its sins. It lacks songs that really stick with you, or at least lacks songs that are as catchy as those found on their stellar first two albums. The album is frontloaded and later tracks, like ‘Finger Back’ and ‘Worship You,’ pass by pleasantly but without making a deep impression. ‘Hudson’ is a crawling sinister affair and the album’s only real misstep: Koenig delivers his lines a little archly, as if they were riddles, over a mischievous bassline while drums hammer out a martial rhythm and spooky strings or their synth stand-ins haunt the background.

As ‘I Think Ur a Contra’ closed out Contra on a brief, quiet note, this record concludes with ‘Young Lion.’ After a warped sounding recording of piano opens the song, Koenig sings “You take your time” in multi-tracked harmony before the piano returns. It’s pretty and, just as ‘I Think Ur a Contra’ mirrored Contra’s warmth, ‘Young Lion’ is appropriately uneasy sounding. It just isn’t as indelible as its predecessor.

Koenig’s lyrics are knotty, allusive and often seem cleverly nonsensical at first. Yet, on repeat listens Modern Vampires of The City reveals itself as an agnostic’s attempt to puzzle out meaning in a world where conventions have fallen away or lost their magic. It’s melancholy, nostalgic for the certainty of youth or, rightly or wrongly, the past. Koenig is engaged with the world in a serious way that doesn’t preclude fun or playfulness. And even as the band’s sound has evolved, the music remains immaculately crafted and distinctively its own. Those aren’t easy tricks and, whether it reaches the heights of the band’s previous work or not, they make Modern Vampires of The City a pleasure.