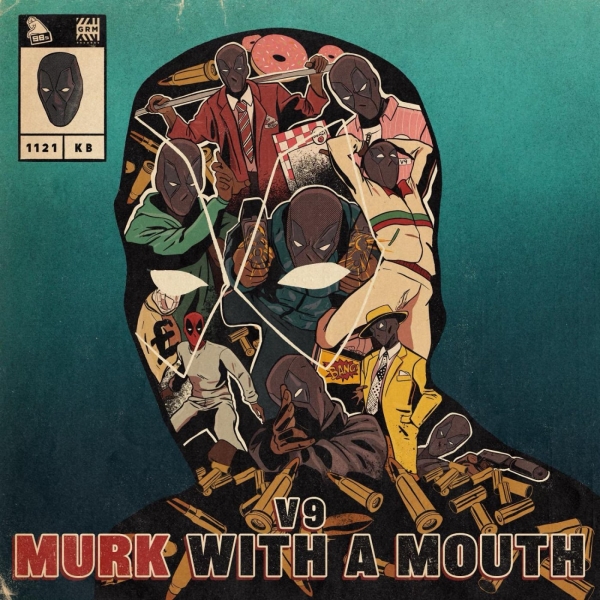 Masked antagonist V9 continues his prolific rampage through the gritty lane of UK drill, following on from his 2020 offering Yūdokuna (‘venomous’ in Japanese) with Murk With A Mouth. Showing no signs of stopping, he’s building up quite the poisonous catalogue. Opening his twisted tales with the catchphrase “Mmm, ay, come ‘ere!”. Do we have a choice?

Proficient at building storyboards that would make politicians quake in their chambers, V9’s art is no different from the Tarantinos and the Madhouse productions of this world. Escaping into the fascination with ultra-violence and murking his enemies with his words; he’s upfront, in your face and knows how to wield controversy in his favour.

His obsession with Japanese imagery as well as Marvel comic references are key to his inspiration. With this latest project, he enlists heavy hitters in the UK production scene ranging from Gotcha, Ghosty, AV The Producer, R14 and Hargo as well as many new and up-and-coming producers. The unique artwork (crafted by Kieron Boothe), as well as his name pronounced ‘venom’ (another Marvel character) and the infamous Deadpool mask he is never seen without. All embody the mystery of the Homerton Sensei. Accompanying V9 on his mission are 98s alumni Unknown T, Jimmy, Billy Billions and Mazza, a mysterious voice on the R&B scene: znzē, as well as the Mercury Prize-nominated masterful pen of Ghetts.

Shock and awe is his aim. What sets V9 apart from the overflowing classroom of his peers are the visuals for his music videos, most recently with “Change” and “Hole In One” that showcase V9’s creative direction and dark humour. Stand out tracks on Murk With A Mouth include his introduction to the mixtape, “Shoulda Woulda Coulda” ft. Ghetts and “Double S” ft. znzē which offers a distinct ‘R&Drill’ vibe that is gaining momentum in V9’s field of choice.

Murk With A Mouth is a mixtape for the purists of UK drill, it pulls no punches and sings like a samurai sword in the dark. It offers glimpses into new avenues for V9 to flex his muscles and solidifies his position on the vanguard of the scene.