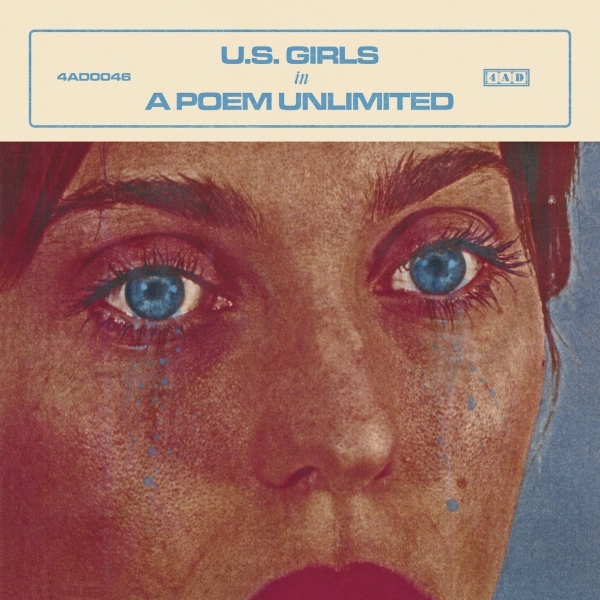 Meg Remy’s U.S. Girls project has, amongst other things, released an album of “dusty, minimal textures” for 4AD called Half Free, supported Iggy Pop and the Rancho De La Luna All-Stars on the American leg of the Post Pop Depression tour, and built up a reputation as a fabulously engaging live act.

Her latest album (with multiple collaborators), In a Poem Unlimited, is markedly a different beast to its predecessor: samples have been replaced with crackling, fiery guitars, gauzy washes of retro synths and deep, molasses-sweet vocals. Oh, and grooves. Lots and lots of grooves.

Opener “Velvet for Sale” slithers and slides – it’s a groovy, slow-burning voodoo funk piece featuring syrupy wah guitars and restrained yet powerful percussion. The slow-burn enters full ignition during the chorus, when rich brass tones mesh with Remy’s multi-tracked vocals – vocals which ooze a smoky, seductive vibe. Two-thirds of way in, a Fripp/Belew-ish firework display of a solo blasts through the speakers, wailing and moaning with debauched atmospherics.

Remy continues the luxurious sense of decadence into the second track, “Rage of Plastics”. The deliciously deranged guitar theatrics return – proggy smoothness one moment, crunchy post-punk angularity the next. Then there’s a honking, thrusting saxophone that pops from the speakers. It’s an unbelievably sexy track – the fat-bottomed bass and the femme-fatale vocal timbre may have something to do with that, though.

Lead-off single “M.A.H.” (Mad as Hell) puts the listener into a delightfully odd position: the relentless disco grooves recall ABBA, yet the lyrics are as caustic and bilious as a Plath poem. It’s an exuberant contrast that exemplifies the themes on display here: the album is being touted as Remy’s “most individually distilled protest to date”. It’s a musing on the state of a failed romance, with references to the narrator being taken for an “eight-year ride” and lies shining in her lover’s eyes. It’s more sour than bittersweet.

Album highlight “Incidental Boogie” crashes through the speakers with metronomic percussion and molten sheets of metallic guitar. Remy masterfully arranges the guitar squalls that pepper the track (and the album) in a manner that evokes David Bowie circa Heroes and Lodger – the writhing, searing tones mesh and interlace seamlessly into sexy, restrained sculptures of sound. There’s an intensity and insistence to the track that pushes the vibe of the track towards 90s industrial in terms of texture – which is no bad thing.

The album then takes a hard left into another album highlight – “L-Over”. It’s the kind of stripper-glam peddled by Joe Walsh on “Rocky Mountain Way”, or George Thorogood on “Bad to the Bone, filtered through a digital kaleidoscope. You read that correctly. Grinding bass bubbles and pops against synth washes and red-blooded percussion stomps. The lyrics are again concerned with a crumbling relationship: The L being resented because it’s really Over. It’ll have you reaching for the needle/buttons/keys to repeat again and again.

The motorik sequencers and robotic synths of “Poem” are reminiscent of Chromatics and carry the same kind of romantic tension in their waves. The lyrics continue the detached sentimentality of the earlier tracks: “We all know what’s right. We didn’t get it from a book or a site.” Remy’s lushly treated vocals coo and moan beautifully here (as they do throughout the record.)

Album closer “Time”, coincidentally the longest track on the album, distils the journey of the entire record into one splendid seven-minute opus. There’s another eccentric guitar solo – this time more Mark Knopfler than Robert Fripp. But the real beauty of the track lies in the layers of honking sax – you can picture ex-tour-mate Iggy Pop grinning at the Funhouse-style skronks and detonations. It blows the record out in a suitably monumental, wailing crescendo.

The album is undoubtedly going to end up on many writers’ end-of-year lists, and it’s only February. Remy and her co-conspirators have truly set the bar for great records in 2018, by drawing from the best elements of nocturnal power from bygone eras. It’s all here – just wait and see.