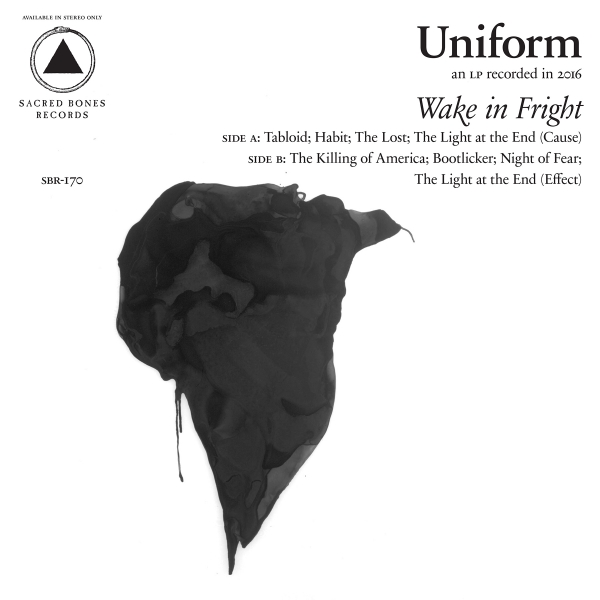 Intentionally planned or not, the release date for the new album from New York City’s industrial duo Uniform coincides with the American presidential inauguration. The more apparent tormentors of Wake in Fright are personal struggles rather than social or political anxieties, but in this age of noise the distinction between them increasingly blurs.

The greater setting, too, is hard to ignore. Contextualizing the record, guitarist/producer Ben Greenberg (formerly of The Men) observed, “We are surrounded by war and the whole world is burning and it doesn't seem like there are any appropriate reactions or responses left anymore.” There is a scorched earth trail from “The Killing of America” here back to Ministry’s Land of Rape and Honey, littered with shrapnel from thrash metal’s mechanization.

Uniform’s stark debut, Perfect World, stripped all but a few remaining vestiges of rock ‘n’ roll out of their futurist grinding, but the increased deployment of menacing guitar riffs callus-inducing solos on tracks like “Habit” and “Bootlicker” bring vintage thrust and shred. Goth night banger “The Lost” is a standout, easily the closest Uniform have edged to the dance floor. Both Greenberg and vocalist Michael Berdan (ex-Drunkdriver) find a groove without mellowing their harsh. In that respect, the closest thing the record has to an accessible entry point is mostly on its own.

For all of its violent movement, Wake in Fright - to borrow from the horror themes nodded to throughout - can leave one feeling like their feet are nailed to the floor. The album digs for transcendence by jackhammering away at the ills and addictions that afflict individuals and hold us back collectively. Uniform’s journey to zen through anger leads to draining music for the morning after.