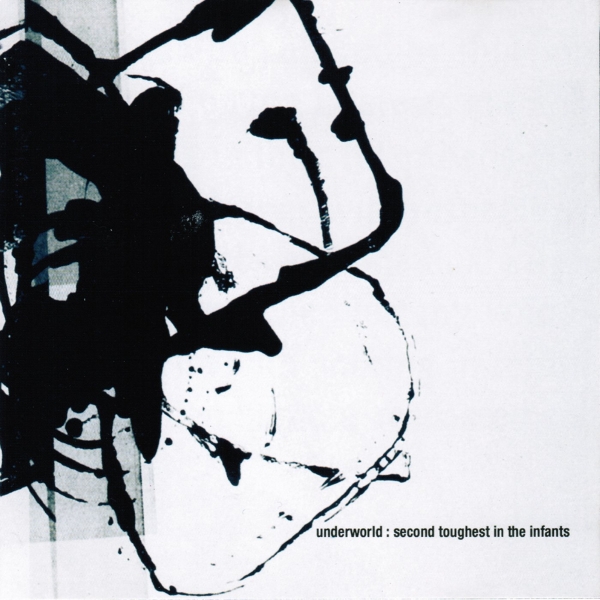 For all the plaudits Underworld MK2 quite rightly received for their 1994 album Dubnobasswithmyheadman, it was the sound of an act breaking in a new member while finding their way in a genre of music they’d only flirted with previously.

The likes of Fluke, Transglobal Underground and Banco Di Gaia were all trading in this kind of dubby techno at the time, Underworld took this template and rocked it up, creating a genuine classic in the process. This 1996 follow up, re-released in a similar way (4CD deluxe set) to last year's Dubnobass... was even better. Here we had Underworld in its purest form, Darren Emerson’s influence here is key - his solo releases on his Underwater imprint make his influence here explicit. Obviously he's not solely responsible for the sheer greatness of Second Toughest..., the fusion of rock, dub, drum n’ bass, washed with beautiful Detroit techno drum patterns, and almost Proggy synth work shows three artists performing at their absolute optimum.

The seventeen minutes of opener “Juanita: Kiteless: To Dream Of Love” and the following fifteen of “Banstyle Sappys Curry” follow a similar structural approach where fragments of music sewn are together, following the loud-QUIET-loud formula of the likes of The Pixies, subverted by playing it through machinery, taking rock, and techno to whole new dimensions. It makes for one of the best openings to an album ever; both make up a suite of three tracks, all very different, but merged to make total sense which two decades remain devastating pieces of music.

The nervous energy of the former’s build up, the mid-section of no nonsense techno jacking breakdown, into the spectacular Phillip Glass-influenced glacial ambience of the final beatless section, or the former’s drum 'n bass (which was everywhere back in '96) beats, the Pink Floydian keys and acoustic guitar passage, before the frantic techno ending immediately set them way above their peers at the time. Remembering that the house and techno boom was still less than ten years old, and the best music generally came in the form of standalone tracks, artist long players were still a pretty new thing. On the whole only Orbital’s Brown album, Exit Planet Dust by The Chemical Brothers, The Prodigy’s Music For The Jilted Generation and Underworld’s own Dubnobass... were the only true great long player’s to transcend their genre boundaries.

Even back in ‘96, the influence that Second Toughest.. was to have and the longevity it was to enjoy was immediate. How could it not be with those first two tracks? After the complexity of those, the general simplicity of "Confusion The Waitress” proves to be a stirring shift into straight forward 140 bpm beat-fest; nothing intricate here, just a heads down, sweat dripping from ceiling, no nonsense techno thrill.

The showpiece here is “Pearls Girl”. Clinical in execution, the fusion of fierce breakbeats with hard jungle drums, bubbling John Carpenter synth work, and vocalist Karl Hyde at his most oblique, “Rioja, Rioja / Reverend Al Green / Deep Blue Morocco / The water on stone / Andalusia / Red Yellow / Red Yellow / Black Car / Red Light", which uses the same cut up lyrical technique deployed by Thom Yorke famously on Radiohead’s 2000 album Kid A. This is Underworld at their most complete and thrilling best.

The album’s eight tracks are all very different but complement each other perfectly. The closing two  - the muffled blusey riffs of “Blueski” and the 5am desolation of “Stagger” - provide a natural comedown to the wanton euphoria of what came before it. Elsewhere in the set, you get a number of their B-sides from this period; “Mosaic” and “Puppies” are two excellent pieces of minimalism which pre-date the likes of Shackleton by over a decade. A disc of unreleased material provides a fascinating back story to what the album became, too; “Techno Thang”’s title gives the game away as does “D & B Thing” while the final disc is dedicated to their albatross , “Born Slippy" and its myriad of guises.

Originally released as a standalone between the two albums, and re-released in ’96 due to its popularity after its inclusion to Danny Boyle’s Trainspotting film, "Born Slippy" managed to overshadow Second Toughest somewhat. Even though it's a totally played-out track that audience and probably band have heard more than enough of, as soon as that riff kicks in, the knuckles whiten, the jaws slacken, and it's enough to bring out the rave uncle in all of us. If you're a fan, there's an excessive nine different versions to go through.

In the album's brutality there was always beauty, but in its beauty there were tints of melancholy. These are the reasons why after laying down the template for some incredible electronic long players that have come since, Second Toughest In The Infants became the album impossible to beat.