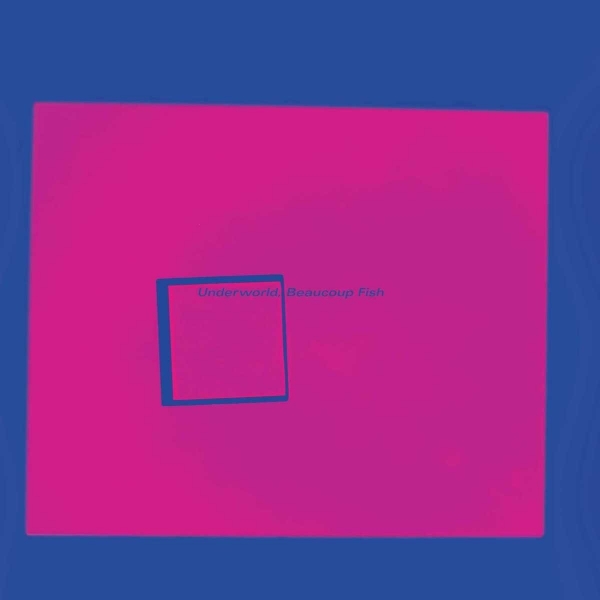 Thanks to the success of “Born Slippy .NUXX” after featuring on Danny Boyle’s 1996 film Trainspotting, Underworld’s fourth album (or second if you disregard their two synth pop efforts of the 1980s, as they do), Second Toughest in the Infants enjoyed an unexpected level of success due to said track being tagged onto a re-issued version.

Beaucoup Fish, released three years later, is a much more bizarre record than their breakthrough; there’s little of the subtlety of the 1994 classic Dubnobasswithmyheadman, nor much of the ‘what does this do?’ genre hopping of Second Toughest...

Informed by the club sounds of the time - this being an era where trance and hard house pumped out of club speakers across the country – Beaucoup Fish is their most robust album, one that marked a shift from the lyrical obliqueness of past material.

Following their trend of opening albums with an absolute killer cut, the earth-shuddering merged tryptic of tracks on the twelve minutes of "Cups" is up there with their best material. Initially subdued, the dramatic synths and warm, glitchy tech of the first third is perfectly matched with a heavily vocoder-ed and subdued vocal from Karl Hyde, the couplet “Bubble blow a bit faster liquid / bubble fish take fast now faster” showing he was sticking very much to his random cutting and pasting of words technique to come up with lyrics. The mid-section’s use of live (sounding) percussion and David Gilmour-esque washes of guitar act as an effective way to make the listener fall into a trancelike state, making the final third of fierce breakbeats, stuttering cut up vocal noise, synth anger and filthy riffs of electronic dysfunction a devastating thrill. It remains one of their very best pieces of work.

Underworld’s electronic counterparts at this point had all splintered into different areas; Leftfield spent an age recording a second album which, when it finally landed, was…ok, Orbital ventured further into soundtracks and The Prodigy were in the middle of a seven-year gap between 97’s The Fat of the Land and the underwhelming follow up, Always Outnumbered, Never Outgunned. Beaucoup Fish, however, became Underworld’s sole top three album in the UK chart, and listening back now it’s easy to hear why.

Clanking pianos, pissed synths and techno stabs which act as guitar riffs define their most rockist moment, something darker, angrier and harder rocking than any rock band of the time. "King of Snake"'s jittery re-imagining of Giorgio Moroder’s game-changing arpeggios used on Donna Summer’s "I Feel Love" is wildly uncommercial but earwormy with it, and on "Jumbo" they operate almost as a pop act. Using the urgency of techno, bubbling 808 basslines and the swagger of an act knowing they’re creating a timeless classic, it’s the nearest representation of a love song they’ve recorded. As Hyde yearns “I need water / I need a little water, sugar / I get thoughts about you / and the night wants me like a little lost child”, waves of synth create the album’s moment of pure euphoria, the closing half’s use of Phillip Glass influenced chiming piano is a masterful addition on a truly sublime piece of music.

Elsewhere, "Winjer" doesn’t do much, but does it prettily. This, followed by the Eno-esque ambient noodling of "Skym", creates a mid-album lull, neither particularly bad, but the shift from big room poundings to introspective calm doesn’t work that well.

As with the reissues of the two albums prior, the deluxe version of Beaucoup Fish comes in a four CD set. Where previous reissues were crammed with unreleased tracks and fascinating demos, the additional CDs here are mainly variations of the original tracks or remixes by the likes of Salt City Orchestra, techno gods Dave Clarke and Adam Beyer, who excel in their remix work, but the additional CDs won’t have you learning new about the original version.

Beaucoup Fish is a strong album, but it lacks the precision and focus of their previous two records. With Darren Emerson’s split from the band shortly after its release, Hyde alongside Rick Smith released three patchy albums as a duo, not hitting the money again until last year’s excellent return to form, Barbara Babara, We Face A Shining Future. It’s pretty certain that we won’t be needing an extensive deluxe set of 2007’s Oblivion With Bells anytime soon, but returning to this album will act as a reminder of their brilliance.