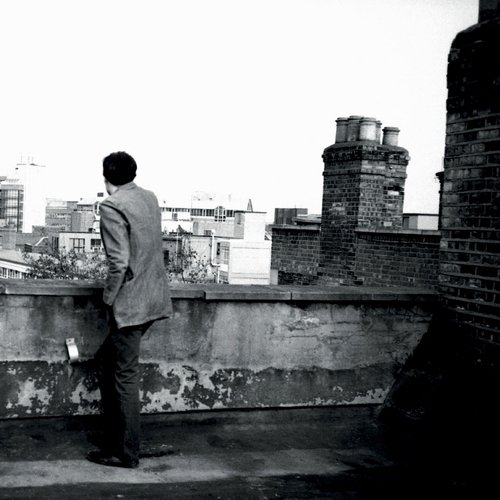 Odd clattering noises, some bubbling lava, the whir of traffic, spiralling electronic loops, even a station announcer in the distance … just some of the sounds greeting the listener on Ulrich Schnauss’s synthesizer fade-in to ‘Borrowed Time’, the opening for his long-awaited solo project A Long Way To Fall. Breathing magic into music is all part of the electronic wizard’s charm, whether as producer, musician, re-mixer, or just all-round studio boffin. His 2010 remix collection Missing Deadlines is a great place to review the last 2 decades of traces he’s left behind in other people’s music, some amazing shoegaze-tronica with the trademark multi-layering of electronic sounds all set against a great wall of reverb and echo. Classic Schnauss sonic exploration is like something approaching you from a distance, the fade-in and -out again which he himself captured so well, for example, on his 2001 solo debut Far Away Trains Passing By.

The artist, originally from Kiel in Germany, never quite fitted in with ’90s Berlin techno, his patchwork approach to composition somehow better suited to London’s musical eclecticism and the early Warp artists like Black Dog and Autechre. Then there was the fascination with bands like Slowdive and My Bloody Valentine, Schnauss setting a lot of his early solo material in this odd musical mix’n’match. His last album, Goodbye in 2007, seemed to crown all these efforts, but clearly signalled the need for change. Last year’s Underrated Silence, his collaboration with Mark Peters of Engineers, hinted at this, but while the instrumentals on that album were quite mellow and chilled, A Long Way To Fall is harder and more abrasive, with an icy chill running through its core.

Some will be disappointed he hasn’t made a Goodbye II and rehashed the shoegaze stuff, but to be fair Schnauss seems more intent on being true to himself on this one, putting the beloved synthesizer right back at the heart of his music. Conventional song structures (with vocals) have been replaced by musical and sonic exploration with a much more open-ended approach to composition. There are strong hints of his recent 77 EP with Drum and Bass DJ James Clements/ASC and he’s also playing the legendary Yamaha CS-80 synthesizer which Vangelis used on film soundtracks like Bladerunner and Chariots Of Fire, so the overall effect is quite cinematic. Perhaps most interestingly of all, there are echoes of the ’70s progressive rock of Tangerine Dream, Cluster and Neu! Is Schnauss re-connecting with his estranged homeland, I wonder?

The penny drops for me at the end of ‘Ten Years’, the second track in. It’s a fairly good barometer of where his head and heart must be at these days, the sequenced electronics lifting a velveteen haze of moondust, and did I just spot Harrison Ford trying to bounty-hunt a stray replicant …? That film may be ’70s, but the music’s a decade later with Art Of Noise experimentalism or the classic synth-lite touches of Yellow Magic Orchestra. Tracks like the opener and ‘I Take Comfort In Your Ignorance’ are metronomic and abrasive, almost militaristic and robotic, while on ‘Ten Years’ and ‘Her And The Sea’, the sound is more spaced out and celestial. The gentle droning effect and piped synth on the latter provide a nice atmospheric backdrop for the various crackles and pops, and the bells he sets chiming.

The album works best when Schnauss experiments with the sound, like on the excellent ‘Broken Homes’. Slower and easier on the ear, the popcorn-like electronic sounds are mashed up with a chanting male choir and enchanting voiced sounds. With a brilliant interlude in the middle where the whole piece seems to hang momentarily in the air, the electronic maestro is finally in his element. Similarly, ‘Like A Ghost In Your Own Life’ is the closest the album comes to a straightforward pop song, the synth riff generated on his CS-80 sounding something like all those ’70s US TV series soundtracks played by Jan Hammer, Georgio Moroder and their like. It is also very similar in structure to atmospheric-sounding ‘Rosem Im Asphalt’ from Underrated Silence. ‘The Weight Of Darkening Skies’ is wistful and graceful, picking up the tempo again right at the end. The problem is that too much of A Long Way To Fall is barely passable soundtrack material. Songs like ‘A Ritual Of Time And Death’, ‘A Forgotten Birthday’ and the title track all start promisingly, but just fade into the ether leaving an icy chill over their 5+ minutes.

So no actual smoke and mirrors on his latest solo project. Ulrich Schnauss has dropped his usual shoegaze (dis)guise to create a more open-ended musical narrative with his synthesizer jams. The latent need for shoegaze is left unsatiated, at least until the next Engineers album, or whenever he gets back to twiddling the dials for somebody else. On going solo again, Schnauss has married some of the experimentation of German progressive rock with his love of trance, techno and drum and bass, and in the process reconnected with things that got him interested in music in the first place. The results can be more chilly than chilled this time, not always making for an easy listen, but there’s certainly a process at play here. On A Long Way To Fall the artist perhaps most famous for the essence of music he leaves behind is starting to sound more like his true self.