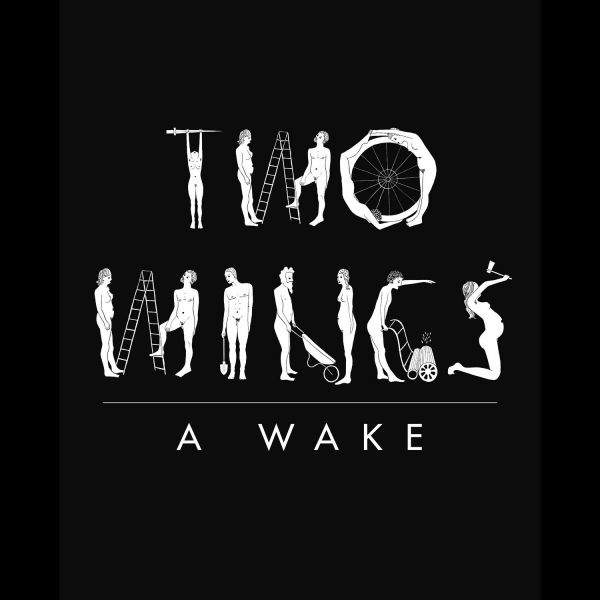 I doubt anyone, even the band itself, would find much fault with comparing Two Wings to Rumors-era Fleetwood Mac. Indeed, once those guitars being to creep in like coastal fog, once the song bursts into intrepid forward pop-motion after hovering in mist, once album opener “Peace-Fear” winds its way through the weary bends of a guitar solo and into Hanna Tuulikki’s other-worldly voice, one isn’t left with much choice. That bewitching mixture of mysticism and cynicism, bleary yet bright, defines A Wake, the intermittently great new album from Two Wings; but it also earnestly recalls the work of Stevie Nicks and Lindsey Buckingham at its haunting best. Indeed, even the way the song’s chorus bounces between Tuulikki’s hook (“I’m falliiiiiing”) and Ben Reynolds’ warping guitar echoes the melodramatics of something like “The Chain,” where the musical interplay of Nicks and Buckingham was informed and supercharged by their heated interpersonal conflicts. Even thirty-five years later, it’s tough to know just how rooted the public’s fascination with Rumors was in the turmoil that surrounded it. To Two Wings’ great credit, the band manages to replicate the tense whirlwind of that album (and a lot of other great records from the ghostly mid-seventies renaissance of Laurel Canyon) without any base recourse to soap opera material.

Even more impressively, Two Wings recall this stuff because they have just that clear-eyed a knack for songcraft. Like the dearly missed indie-rock outfit Rilo Kiley, Two Wings summon up the Mac (and Joni Mitchell and Neil Young) not simply because their band is similarly arranged, but because, at their best, the band’s songs are similarly arranged. Take the “Sunday morning” waltz of second track “Adieu,” which trots across wonderfully tired guitars and into a crisp, near-operatic interlude of blue-eyed soul. The verse lulls, only to slowly eclipse into gently lovely choruses, before bursting back into those barbed guitars, swaying as though hung over, especially poignant as they hang over a bridge of humming electric organ. The band hails from Scotland, and betrays some of fellow countrymen Belle And Sebastian’s classicism, but Two Wings has managed to erase that band’s quotation marks. Its take on West Coast bummer-rock is wholly convincing, and utterly sincere.

“You Give Me Love” is similarly notable for its soft-focus take on the kind of soul music Dusty Springfield and Van Morrison were making back before Two Wings were likely born. Like the rest of the album, the song ambles along on drunken legs, but it’s a pace that agrees with Two Wings’ gifts for evoking a certain flavor of resigned charm. Strains of flute and brass fleck the song’s rhythm-and-blues, similarly wheezy and besotted-sounding. Yet the band nails all the little dramatic pauses, Tuulikki nurses her delivery of “You give me…love” for all the drama it can offer. Two Wings are great dramatists and even better listeners, constantly showing off their relationship with their vinyl collections and their radio dials.

Elsewhere, “Stranger” (if that isn’t a Fleetwood Mac title it ought to be) slowly builds from the measured gloom of its early moments into an expertly-drawn pop chorus, all interweaving harmonies and trickling keyboards. More interesting is “A Wake To The Dream,” a song that excavates another relic of 70s sun-and-fog California aesthetic, this time the glassy-eyed stumbling of L.A. country rock. Vocals here are handled by Ben Reynolds, who does a decent job of capturing the kind of knowing twang of counter-culture Americana that “A Wake To The Dream” quotes liberally. Indeed, the song recalls another eminent pairing, Graham Parsons and Emmylou Harris, in the ways in which Tuulikki’s skylarking harmonies halo the agreeably moribund baritone of Reynolds.

The album is at its best when playing with this kind of groggy realism. Conversely, A Wake drags when it gets too bogged down in the wrong kind of mysticism. Unfortunately, for a relatively brief album, these moments take up a bit too much of the balance. “Loveless” quotes The Beatles “I Want You (She’s So Heavy”) – indeed, certain minor-key arpeggios can’t help but sound like that one – a tad too literally, trying and failing to top the dramatics of a song that stood at the peak of the Fab Four’s most theatrical songs. That Tuulikki’s vocals tend to grate whenever she tries to over-invest in Renaissance Fair play-acting (she can occasionally recall an early Joanna Newsome, albeit at a lower register) doesn’t help. That vaguely Medieval flair is also present in “We Can Show You More,” a song whose old Celtic lilt is a bit much, especially when Two Wings are so adept at living in a different world.

Better is album closer “Go To Sleep,” another waltz-time interlude of exhaustion (it is called “Go To Sleep” after all…). While the song again operates in the band’s signature triangulation of West Coast country, Atlantic Records soul, and UK folk, its yesteryear reach goes even further, to girl-groups and 50s novelty jingles, offering an even more day-dreamy aura to the song’s seven-minute sweep. Horns eventually ebb their way back in, drums and guitars build, crest, and recede, and the whole thing feels like a group of deft players falling down one at a time, dead tired. It’s a different kind of drama for a band that excels at that sort of thing, a different emotional key for a group of significantly skilled play-actors. There’s a clever pun in ending a record called A Wake with a song called “Go To Sleep,” but there’s even more value in the band making you want to do anything but. More likely, you’ll flip the thing back over to Side A; more likely you’ll waltz and sway and emote along, all over again.