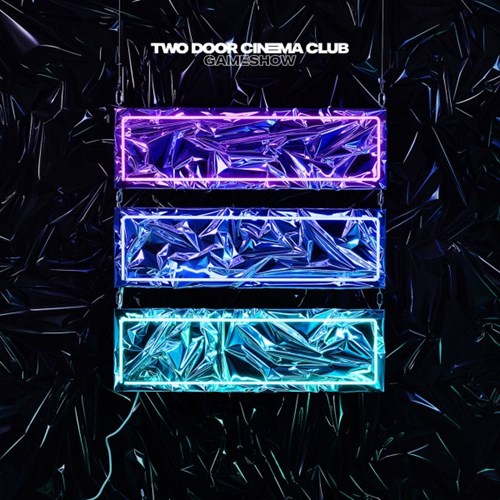 ​​They say a change is as good as a rest. Two Door Cinema Club have taken both just for good measure before their third album Gameshow.

The world is pretty messed up. We have bands like TDCC working so relentlessly in the industry rat race that they are driven to stomach ulcer-inducing levels of anxiety, requiring complete life detoxes to re-balance their lives’ as humans, let alone musicians. A Mustang photography tour of America, a move to LA to get away from music and a stable house-husband later and Two Door Trio are back in the game... show, sort of.

Perhaps as you would expect after a break from anything, Gameshow looks back at how the band used to work and how they struggled. While many of the lyrics look backward, the music looks forward. It’s a solid idea, but as their previous experiences have taught them, they probably don’t care what anyone but their fans think of the new material, it’s what they wanted to try and felt most natural. The first track kicks off with a pop at the media: “What will you write about? / How did you find that out?” The pressure to constantly please is certainly part of the ‘gameshow mentality’ that anyone in the public eye must maintain, as cameras are trained on their every move. However, it takes in a wider sickness we have in our society whereby the self-surveillance of social media makes us all display our best selves at all times with a million dollar smile, riding an elephant bunjee jumping in New Zealand.

There’s a really funky sound from the beginning (the band cite trail-blazers Prince and Bowie as inspiration and aspiration) and it makes the music a lot of fun. You can hear a lightness in Trimble’s voice, which includes some sweet falsetto, and the confidence implicit in the physical swagger of the style.

The album is fresh with synth, bells and whistles that could be part of an actual gameshow. There are some cracking verses and screeching guitar sections that will sound great live. It’s just nice to hear them enjoying themselves after a difficult period.