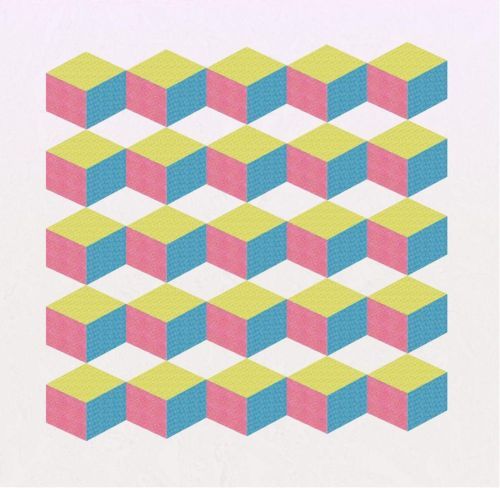 The growth from a twee fidgety trio through to a fledged and tangible electro foursome is reflected through the concept behind the album. Not that R O M A N C E can be described as a ‘concept album’ per say: there is no overt mystical vein or grand operatic tale running throughout, but the album’s methodical compilation is subtly intriguing. Lead vocalist Joseph Prendergast has rejected a conventionally emotive writing stimulus in favour of a complete lack of personal attachment to the lyrics. Rather than using egocentric references to relationships or even vague abstract depictions of events that hold meaning to him, the words are a hotchpotch of borrowed and adopted references from female poets throughout history. Prendergast defines this emotional disconnectedness as putting himself in the position of reader rather than writer.

But although it could be considered a lazy method of penning lyrics, the words as an essentially meaningless device means that Prendergast’s distinctive voice plays the part of just another instrumental layer in the unpredictable swoops of spacious intervals. The jigsaw of words, sometimes ‘re-wind and double-check that’s what he actually said’ phrases drawing you in (“Sun-tusk haze of golden / east will swallow your Comic Sans lover” – These lines alone cite the works of 6 poets over 3 decades, in case you wondered).

The new presence of fourth member and producer James Elliot Field is clear throughout, as the zany and sometimes theramin-reminiscent synths (‘My First Castle’ bordering on Clangers-esque blips and bloops) add a woozy Nintendo level, distinctly separating the sound from their debut Our First American Friends.

For the Poirot wannabes amongst you, the band have created a secret password-protected online index citing the references of dozens of writers from Sylvia Plath to Carol Ann Duffy alongside the lyrics. Only the eagle-eyed fans who spot the details hidden amongst the album artwork will be able to access the expansive appendix and figure out just where those odd lyrics you thought you heard have come from.

While edgy and chipper for the most part with a few deliciously dreamy lulls (’4T3′), the album is never boring. With the help of fans trusting enough to preorder so that the band could afford to create the album, it is the first release from Pink Mist – a collaborative music group made up of Scary Monsters, Holy Roar Records and Blood & Biscuits.