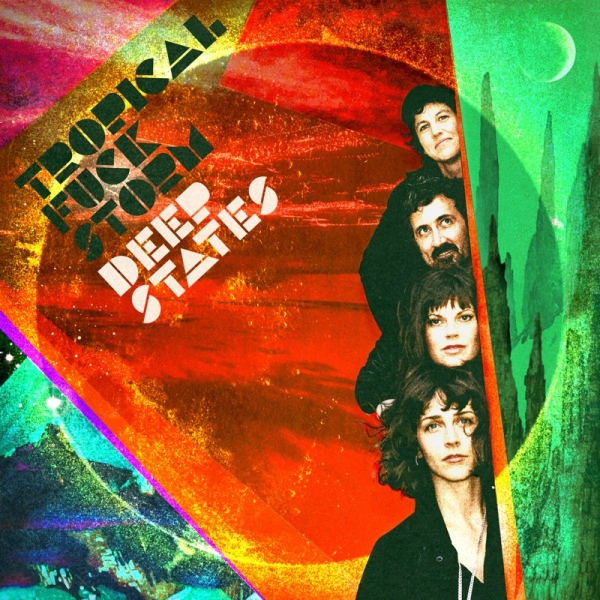 Tropical Fuck Storm have often stood out like a sore thumb amongst Australia’s psych scene. Opting for processed beats, wailing riffs and post-punk ramblings rather than the garage-surf guitars and falsetto combo that most of their compadres go for, nonetheless, Tropical F*ck Storm’s first two outings, A Laughing Death in Meatspace and Braindrops were both relative successes. But where those two records were great exercises in dark, organised chaos, Deep States is just plain chaos.

Even the hardiest of psychonauts will likely struggle to find much fun here. Tropical F*ck Storm don’t seem to have decided whether they want to write witty, legitimate rock tunes or extended psychedelic improvisations, and the result is something that lacks the wonder of either, and sounds distinctly like early ‘70s Can being performed by 6-year-olds. Any sense of wacky, lo-fi appeal, or krautrock-ian spectacle has been quashed by Gareth Liddiard’s unintelligible, deep-fried vocal delivery and some very distracting production choices.

The biggest offender to the ears on this album is the drums. A stab at that washy, compressed punch that Tame Impala’s Kevin Parker nails so perfectly, Tropical F*ck Storm manage to butcher every beat, whether it's a kick or a cymbal, until it sounds like an obnoxious squelch. This is especially bizarre when held against the raw, garage aesthetic that the other instruments seem to embrace.

There's a sense that perhaps, underneath all the seemingly involuntary squealing and bleeping, Deep States might have some half-decent songwriting on it. ”The Greatest Story Ever Told” and “Suburbiopa” both manage to tick along pretty nicely, with some palpable hooks and plenty of wah wah, yet even they fail to make a lasting impression more than two minutes after the album finishes.

It’s genuinely saddening to tear down a band that showed as much bizarre genius as Tropical F*ck Storm did when they broke out, but nothing about Deep States feels authentically trippy, authentically dark or authentically weird. Near-on every element feels both forced and misguided, be it the performances, songwriting or the production. If in desperate need, just relisten to that Squid album instead.