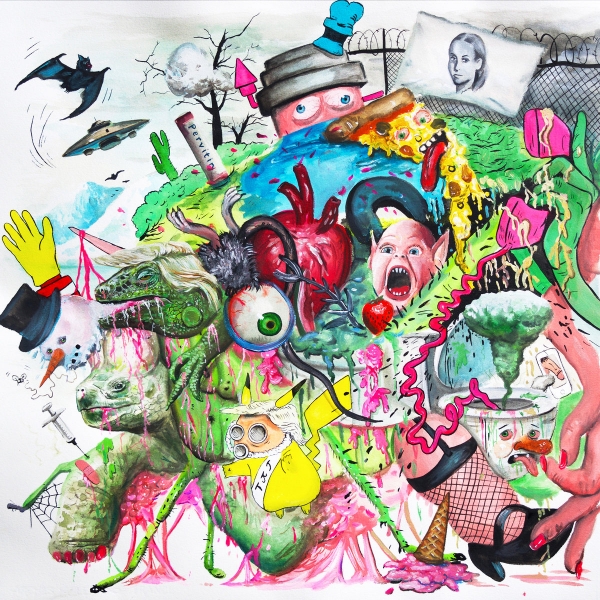 Disheveled and exultant, Tropical Fuck Storm’s second album bends and amplifies the characteristics of their debut, A Laughing Death in Meatspace, which had already done the same for the music of The Drones, the band from which Storm troopers Gareth Liddiard and Fiona Kitschin hail.

In the mid-2000s, with records such as Wait Long by the River and the Bodies of Your Enemies Will Float By, The Drones came on like a chaotic, Crazy-Horse-adoring cousin of the extended garage rock revival family. Compared to Braindrops, those albums now sound practically straight-laced. Many rock ‘n’ roll singers who ride their vocal cords too hard early on have to learn over time how to rein it in or risk diminishing their instrument. Liddiard, founder and primary songwriter of both groups, doesn’t seem too bothered by that prospect as he summons ragged lines from the base of his throat.

The gathering tumble of the opening song “Paradise” indirectly recalls fellow Australians the Dirty Three, specifically “1000 Miles” from that trio’s name-making 1996 album Horse Stories. All roles are rebuked In “1000 Miles”; the guitar keeps time, the drums wander in a state of constant solo, the violin sings, and only by the end does it become clear that not only is the looseness intentional, it isn’t truly loose at all. “Paradise” achieves much the same effect, slouching in with a blues-y meander, seemingly recorded with all the levels already in the red, before lunging forward into an unforeseen crunching, classic rock guitar riff. Liddiard’s bandmates - bassist Kitschin, guitarist/keyboardist Erica Dunn of Harmony and Palm Springs, and drummer Lauren Hammel of High Tension - jump out of the shadows to shout along about fading memory and missed opportunities, and “Paradise” enters a sustained state of crashing until everything has been wrung out of it.

Braindrops is wired and ill at ease with the world around it, yet comfortable in its own twitching, sweat-speckled skin. It moves to its own taut and jerking rhythms without settling into familiar grooves. The bold and semi-dissonant group harmonies of “The Happiest Guy Around” recall Dirty Projectors circa Rise Above. “Maria 62” and the closing “Maria 63” return to the theme of memory, the latter shouldering a striking and detailed story about a meeting with a descendant of a Second World War escapee. Braindrops is as cerebral and gut-level as its name implies, high-minded and high volume, a grand mess that isn’t really a mess at all.