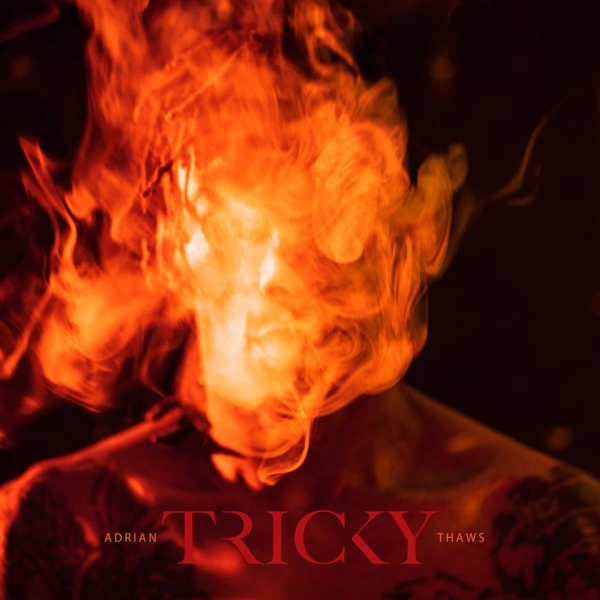 Pioneering trip-hop maverick Tricky has had an indelible mark on British music, and, to be honest, electronic music as a whole by this point in 2014. Hailing from Knowle West (Bristol), Adrian Thaws – both his given name and the title of his upcoming tenth studio record – helped bring the ‘Bristol sound’ into the mainstream, alongside Portishead, Lamb, and former outfit, Massive Attack. These days, you can’t move for trip-hop inspired electro wizards or noir&B corsairs. Everything throbs with low-slung slugs of glowing bass, the scuttle of drum and sweatlodge haze vox.

However, Thaws isn’t content to linger on past glories. On his new album, we see the ardent, chronic experimentalist craft remarkably prescient sounds. Almost three decades into his career, he still retains his signature slow eerie-rap flow and penchant for the moodiest bass-led synth symphonies you’re likely to hear, but Adrian Thaws isn’t an LP that sits back, relaxes or waddles around in safe, tried ‘n’ tested territories. It hoists in guests from the fringes of ‘the norm’ and who are avid avante-garde artists themselves – names like Mykki Blanco, Nneka, Oh Land, Blue Daisy, Tirzah, Francesca Belmonte and Bella Gotti.

Thaws has described this as his “club/hip-hop” album. It’s easy to see what he means. “Nicotine Love”, for example, is a melange of entwined synth pythons and bass vipers, lunging and slithering amongst each other. The beat is firm, the hooks simple – this is designed for sweaty dives and sticky dancefloors. “Why Don’t You”, crammed with rave-tinted D’N’B aggression, is an enormous Lady Leshurr-type grime bombardment: “Why dontcha/why dontcha/why don’t you go and get fucked?” Thaws posits in the chorus, between acidic tirades from Bella Gotti. “Lonnie Listen”, featuring Belmonte and Blanco, slinks through handclaps, and jazzy hip-hop bass backing, and the odd buzzsaw lead. All in all, pretty explosive efforts on the club front.

His hip-hop assault is no less invigorating, if a little sparser. While rap feature heavily in general, there are few that are proper hip-hop cuts. “My Palestine Girl” is one, however. Featuring the ash-gulletted baritone sprechsegang of Blue Daisy, air-raid siren synths and half-time beats stutter behind a politically-charged and lascivious narrative: “She’s trapped in Babylon, I tell her that I won’t be long…” With old-school beats, dub wobs and acerbic dragonbreath, Bella Gotti takes the reins on “Gangster Chronicles”. Think an East End, on form Nicki Minaj, dragged into Madchester’s acid realms. It’s brutal.

Tricky’s struck gold once again with this. Last year’s False Idols was received well, and his critical streak continues with Adrian Thaws. It’s arguably his most ‘out there’ anthology in a while, seeing him properly get to grips with some fresh arenas, but it’s unmistakeably Tricky. He’s an unsung national treasure, still machete-ing a path through the musical jungles.