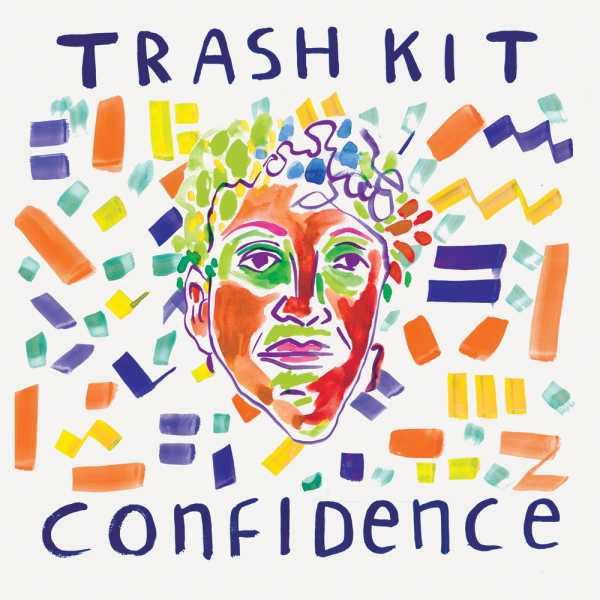 There’s a fine line between carefully constructed madness and ‘noise’, find yourself amongst the latter and you’re likely to be as coherent as Alan Partridge’s geordie mate Michael working in a travel tavern talking to Sue Cook with a fag in her mouth. It’s been four years since their eagerly anticipated Upset! The Rhythm release and if we’re honest, Trash Kit slipped out of the frame for a while. The confidence and intricacy of the sound on their first album offered such scale for progression that, frankly, it’s been hard these past few years. Given the bands stasis, the news of the Confidence LP has had may fans wondering whether things can live up to the initial excitement that the self-titled debut sparked so many moons ago (Spolier: it does).

Trask Kit aren’t intentionally beguiling – "Beach Babe" is seemingly fresh-faced, vibrant and everything you'd want from guitar-led pop – but behind the major intervals there’s something altogether more complex and raw at work. "Medicine" fuses the  trio’s post-punk tendencies with complex, jazz-inspired polyrhythms - add Electrelane's Verity Susman on horns and the subequent result whiffs vaguely of prog sounds not untraceable to the craziness of Robert Fripp and King Crimson.

Structurally Confidence doesn’t deal in choruses, rather the repetition of motifs weaved in and out of temperamental and precise passages. Rachel Aggs’ guitar lines are fiercely tight and work in conjunction with Ros Murray’s warm, stabalising bass and Rachel Horwood’s touch sensitive percussion, creating an unrivalled sense of unity. While sonically there’s little time to breathe on this record, groove is underlining the whole operation. "Skin and Phone" feels challenging - jarring, even - with its angular riffs and Aggs proudly boasting “We stick to our convictions/with stick your restrictions up…”. The momentum builds to a point where it feels like its only option is to implode, but instead they end in a perfectly orchestrated fashion, tuned into a groove indie-night revellers would struggle to find even if they did take their shades off.

Aggs’ voice is buried in the mix on most tracks. On paper the vocal doesn’t seem commensurable with the musicianship; however it blends suitably well in the volatile and tribal landscape created on this release.

Trash Kit manages time and time again to wave off monotony and force new avenues of exploration out of their finite palate of tones and by resisting the urge to expand. "Boredom" is wildly energetic but never complacent - "Leaves" shares a similar vivaciousness with its endlessly wandering guitar, occasionally forming diads - but crucially, nowhere on these tracks is an open chord struck in anger or a distortion pedal engaged.

The album closes with the distinct choppy rhythms and twangy guitars that have become emblematic of Trash Kits sound. Rachel’s style is clean and precise and totally right for being descipherable in the melee; if one looks hard enough you can hear traces of Graceland-esque guitar flourishes in the detail, however, realistically these comparisons are hard to make as Trash Kit are resolutely unique to their philosophy and to their playing. Simultaneously disciplined yet eccentric, refined but raucous, Confidence is a bold and fantastically assured end to the drought.