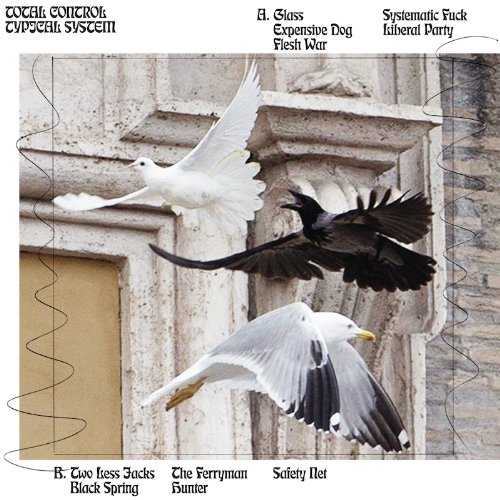 Melbourne based five piece Total Control aren’t a band as such, rather a group of musicians all interlinked by other musical projects coming together to indulge their gloomier sides. Lead vocalist Dan Stewart, a dead poet/philosopher obsessive who heads to the writings of Friedrich Nietzsche, Yukio Mishima and Maurice Blanchot (he’s a philosophy student) for inspiration, also sings with hardcore punk group Straightjacket Nation and drums for gimp rockers UV Race. Mickey Young is a member of garage rockers Eddy Current Suppression Ring, post-punkers Ooga Booga, and part of the electro-gone-Talking-Heads project Lace Curtain on DFA. Oh, and he’s also the producer for all of these bands in among a thousand other musical projects. All the other members also have various musical day jobs to attend to, all Melbourne based, showing off a healthy collaborative nature of its alternative music scene.

These disparate influences are all filtered through the sound of Total Control. Typical System follows on from their impressive 2011 album Henge Beat, a sprawling debut that contained “Carpet Rash”, a shattering post-punk tune of such intensity it’ll make you involuntarily grind your teeth for its entire seven minutes.

This time round things are equally as a murky, but with a few twists. This is to be expected, since the intervening years after their debut have been spent dropping stand-alone electronica releases, an exploration of their psych side on split 7"s with Thee Oh Sees, and returns to their own bands and projects. “Glass” uses analogue electronic drum patterns and new wave synth lines - even though musically it’s the only track on the album like it, starting with something that sounds like 1981 era Depeche Mode is typical of their ‘we can do what we want’, two-fingered attitude. “Flesh War” is a hopelessly fraught piece that really cranks the darkness up. Here, they throw as many of their musical influences as possible into five exhilarating minutes. Stewart’s vocal delivery is at its most detached here, reminiscent of Ian Curtis, while the music is also indicative of the music that backed him. There’s funereal synths, persistent bass and mechanical but live drumming, yet what manages to save it from being yet another Joy Division-aping track are the introduction of rave stabs and a gorgeous chorus break that takes the proto-shoegaze guitar sound of New Zealand’s The Chills and introduces it to 80’s The Icicle Works, creating a must hear piece of an icy bleakness.

Other highlights include the purposefully rudimentary programmed drums and parping sax breaks on “Liberal Party” (with a particularly fragmented and oblique lyric from Stewart; “Broken porch light/shattered sense of worth…you are nowhere, open portrait/pure devotion…you and your words”), the seven minute excursion into krautrock in the form of “Black Spring” , and the Moog laden doom-tronica of “Hunter”, which hawks back to the Suicide indebted sound of their debut.

There’s a bunch of shit talking punk tracks too, still musically oppressive but less desolate than their surroundings. The petulant “Systematic Fuck “ is trashy garage as done by an Oi! band which breaks into an extended Canned Heat style jam halfway through, and “Expensive Dog” leans further towards Stewart’s other hardcore interests with a synth breakdown so gothic it’ll have Andrew Eldritch giving his lawyers a call.

As mentioned before, Total Control aren’t a band. There are no videos, there is no tour. Even their Soundcloud page declares in capitals: “WE CAN’T TOUR SORRY”. If this is the end of whatever this is, they’ve recorded a superlative piece of work which leaves us on one hell of a high, despite it sounding anything but high itself.