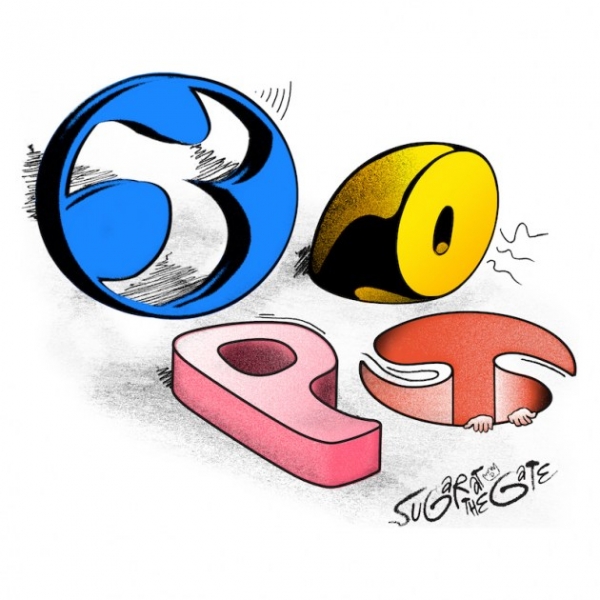 After the success of TOPS’ iconic Picture You Staring (2014), Sugar At The Gate is unapologetically laid back and light-hearted, celebrating the quartet’s move from Montréal to the land of dreams in sunny California. The self-produced album is riddled with juicy hooks that are just as sweet as the album name suggests.

Sugar at the Gate is their third full-length. While recording the album in L.A., the band lived at “Glamdale” - a former brothel turned mini-mansion in Glendale. The album seamlessly fits into that picturesque, breezy Californian aesthetic in a way that’s not cliché.

Vocalist-songwriter and frontwoman of TOPS, Jane Penny has a distinctive voice that’s nostalgic and smooth like honey; romantically weaving you through the album. Penny explains, “Living in L.A. was living out a teenage fantasy, living with your band and practicing in the garage. It was also the first time we’ve ever had that much space to make music.” After making quite the impression with Picture You Staring and charming us with their previous releases, TOPS seems to have taken the liberty to just have fun with Sugar at the Gate and talk about their deeper, real-time desires.

TOPS’ pop-punk vibe is what makes the band’s sound so loveable. The track “Petals” off the album is subtle in its euphemisms. Despite the song’s overt fluffiness, Penny sings, “All I wanna do is / call your name. / Let the petals fall away,” and the flower imagery further adds to that suggestion. The album’s title itself refers to “orgasm, but also carrot chasing, gatekeeping, and the social contract” (Arbutus Records). Jane Penny’s melodies in “Petals” are mysterious, alluring, and signal to her subconscious thoughts. We’re drawn in with more sugary hooks with the track “Further,” in which shallow, high-pitched piano notes add to those salad days vibes.

Sugar at the Gate, as a whole, is surprisingly cryptic, and slowly allows the budding flower of the album’s meaning to unfurl as the listener makes their way through the release. And yet, the album feels immediately convincing and real: it gives you same excitement as if smelling the freshly cut grass in the first days of summertime. It eels both mysterious and real.

Sepia-toned springtime scenes in L.A. are conjured in the music video for “Petals,” reminiscent of Girls’ youthful, garage-punk video for “Lust for Life” (2009). We’re taken on a dreamlike tour of Beverly Hills, with the main focus on a dress-up party. “Petals” encourages us to let loose and be ourselves; even if we’d secretly like to impersonate Madonna or Michael Jackson.

Halfway through the album, with “Marigold & Gray,” TOPS reverts back to its more somber, prom night, and bedroom pop ambiance that we experienced in Picture You Staring (2014), while we traverse new territory with upbeat tracks “Cutlass Cruiser” and “Dayglow Bimbo.”

We’re exposed to even more intimacy by the end of the album with the track “I Just Want to Make You Real,” and despite its tropical feel using flutes and summery chords, the lyrics themselves are vulnerable and forlorn. Penny longingly croons, “I think about you every day. / I want you to feel me.” In “Seconds Erase,” even more layers of intimacy are ripped off as Penny sings, “You no longer need the night to fall asleep. / It was like that when you kissed me.” Reminding us of the sense of utter defenselessness that comes with vulnerability in relationships: a comforting sense of being swathed in another’s being.

Jane Penny and David Carriere (guitarist) both wrote the songs for Sugar at the Gate, creating a strong sensitivity and depth to the album. The album simply feels fuzzy and airy: the feelings that we so closely link with the budding of spring as the frost from winter slowly melts away. It's that undeniable twinkle of hope that reminds us that everything will be alright because seasons come and go, just as the tides of our own emotions rise and fade away.

No matter what, all the releases by TOPS are filled with warmth and emotion. The way the syrupy melodies combine with their clean chords, restrained percussion, and alluring lyricism enables almost anyone to immediately connect with the fresh, wholesome sound of TOPS. At first listen, Sugar at the Gate could be deemed overly saccharine, but the production is so flawless they inevitably give you permission to revel in all of your rose-tinted dreams.