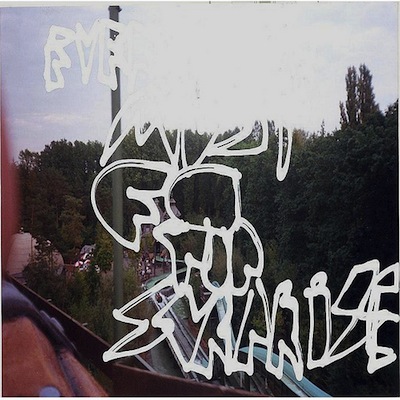 Juiz de Fora in Brazil’s Southeastern state of Minas Gerais has had more than it’s fair share of ascension and decline in it’s brief history. Forming part of the miracle of South American industrial growth in the late 19thC and early 20thC it was later crippled by the faults of government mismanagement and diverted economic interests in the mid 20thC. Then after half a century’s decline a new future emerged that has dragged the fetid corpse of malodorous post-depression industry into an exciting rising stage of continued growth. By this time it’s the 1980s and the future members of Top Surprise are growing up with an awkward energy that materializes from the ups and downs of their near history, complemented by the nascent guitar music coming from America at that time. Artists like Sonic Youth, Dinosaur Jr, Butthole Surfers etc, permeate this record, channelling the monolithic guitars, pounding drums and distorted vocals.

Everything Must Go is a noisy record, slugging away at the speakers and confronting the ear drums in a brutal attack. Yet equally it’s a fairly upbeat record, in part relying upon country-esque bass-lines or sweet melodies that run counterpoint to the blurred aesthetic that is found in the mix. This makes for a rather awkward combination as the wall-of-sound rebounds some of the lighter, happy-go-lucky moments within this half-hour. And of course while the energies of those great American noise-makers are there it’s hardly Sonic Youth’s telling tale of dark Americana as found in Bad Moon Rising tattooed implicitly on the landscape of Brazil’s industrial innards. However whilst I am concerned about the effects of lightness within this heavy record, it manages to produce some stunning instances of real clarity where all elements are in perfect equilibrium causing a spellbinding and hypnotic drawl to burst from the speakers.

Set halfway through the album Home is a wonderful example of this harmony. Playing on a caustic indie-riff, imagine The Rapture, balanced against a dirty, treble-heavy bass-line, the track then builds up to a chorus that encompasses a lazy dance beat and piercing vocals. It sounds like early 80s punk band Flipper but with more agreeable vocals and an easier ear for melody.

Following on from this Lagarto Drugs is a playful trip through a spoken word piece that sees the band enter into it’s most experimental terrain. Of course the Spanish is quite difficult to understand for an English speaker but the tone of the piece reflects the darkest edge of this album, somewhere between happiness and total oblivion, between light and dark. This segues cleverly into the last two tracks of the album which are the consummation of these two opposing forces. At once we have I Shoot The Devil, which is the most upbeat of all the tracks on the album, however much they try and disguise the fact with barrel loads of noise. And finally 80 Comes, which is the album’s quietest and most poignant point. As the final track on the album it works well to tie the threads of this album together leaving the ultimate note to melancholy and sadness, found deep within the echo and the fuzz that plays the album out.