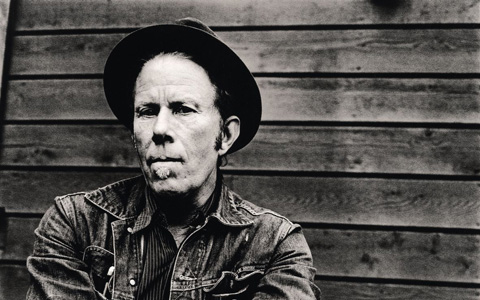 Previous Tom Waits albums have featured postcards from some pretty specific locales – 9th and Hennepin in Minneapolis, California’s KentuckyAvenue – but in 2011, Waits presents the world with one of the vaguest and most uncertain travelogues of his career, the frenetic railroad track ‘Chicago’. Hoping that “maybe things will be better” in the Prairie state, the song coasts along on a chugging beat, its landscape eked out by some ferocious trumpet work and clanging banjo, before leaving the station with a forceful harmonica-whistle. Fortunately, the album it trails, Bad as Me (his seventeenth), is one of his most focussed and streamlined for a couple of decades. “All aboard,” indeed.

As with most of his post-jazzbo-barroom-blooz material, the tracks can be split into what Waits calls ‘bawlers’ and ‘brawlers’ – melodramatic, classicist weepies, and outlandish, Brechtian storms. Some retrace old ground, though not all of it Waits’s own – ‘Raised Right Men’ bears a clanging horrorganic kinship to a similarly-titled track by a certain moustacioed Australian, while the nightmarish ‘Hell Broke Luce’ sounds like a hypercussive Real Gone outtake, with its gruff account of life on Afghanistan’s frontline (“I had a good home, but I left…left! Right! Left!”) marking it out as one of the bleakest moments here. Meanwhile, his newer soundscapes may be subtle, but will make for refreshing listening to hardened Waits acolytes; ‘Face to the Highway’ sounds as if it’s been covered in dust for a century, while ‘Bad as Me’ may well be the most ferocious rocker of his career, a muffled beast of a song, punctuated by some terrifyingly villainous interjections (“No good you say?”) and blocked-gutter laughter.

From pithy one-liners (“All the news is bad – is their any other kind?”) to glorious extended metaphors – ‘Last Leaf’, a sozzled duet with old sparring partner Keith Richards, being a particularly affecting highlight – Bad as Me demonstrates that Waits’s turn of phrase remains undiminished. He even offers a unique rebuttal to a pop-cultural staple – albeit one nearly half a century old; running with the notion that, if the Stones can’t get no satisfaction, what hope is there for regular folk like him, ‘Satisfied’ honky-tonks its percussive, spit-flecked answer: “I will have satisfaction. I will be satisfied.” That Richards once again crops up on the track speaks volumes for Waits’s wonderfully warped mind.

Given that it’s the first album of his fifth decade, Bad as Me stands proudly as one of Tom Waits’s most concise, effective statements. Old friendships get rekindled, new collaborators are introduced (but really, who invited Flea?) and Tom Waits’s unique universe is once again open for business. Bad as Me is the man’s best work since Mule Variations, and yet another fantastic Tom Waits album. To quote the good man, is there any other kind?