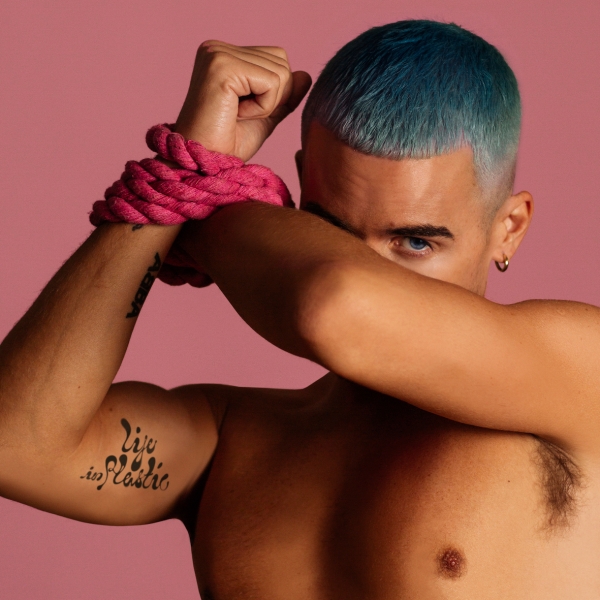 Something about being a Eurovision judge did something to Tom Aspaul. With his second album Life In Plastic, Aspaul has taken a hop, a skip, and a two-step away from the disco sounds of his 2020 debut Black Country Disco and into the familiar yet unexpected realm of europop.

Releasing the disco-ball shaped shackles of his own making and letting himself take inspiration from anything he chooses, Aspaul is feeling freer than ever on his new record. That’s not to say that Black Country Disco was anything bad, but more to say that Life In Plastic is less concept and more about the individual. As he dances from genre to genre, Aspaul doesn’t let his enthusiasm or energy waiver ­– instead he only amps it up.

Life In Plastic sets off with each of the three singles, but the album picks up even more speed by the halfway point – really flexing its musical muscles with the UK garage-infused “What Is Real Anymore?” and Scandi-pop beats of album standout “Statues.” Aspaul even takes notes from Romania’s INNA for the ‘I don’t need a man’ attitude of “Listen 2 Nicole” and sun-soaked “Thessaloniki,” showcasing a varied range of inspiration and considered aspects of production to inject into his music. It’s clear that the inspirations are broad, but they’re certainly not random.

The albums production has a consistent air of DIY meets Eurovision, and while that may sound tacky, it plays only to its benefit. Yes, there are moments where songwriting, instrumentation, and lyrical content could be slightly improved, but the rough-and-ready perspective of the final package is purposeful. It’s like you’re at the Eurovision final, except every act and every country is Tom Aspaul – and this is really driven home with a brilliant rework of Alizée’s “Hey! Amigo!” at the end of the tracklist.

Thematically, the album is less put-together than Black Country Disco, but there are still moments of vulnerability and deeper emotion to be found. Aspaul battles with perceived fame on “Millionaire” and deals with trauma on “Effigy,” but manages to keep things a little simpler in other places like “Kiss It,” where the message is literally what it says on the tin. It’s a fair balance across the album, but there are still points where Aspaul could dive deeper, letting the album breathe for a track or two to reflect and rest from the driving beat. That aside, Life In Plastic is a shining example of an independent artist making the music they want to make, and in the way they want to make it.