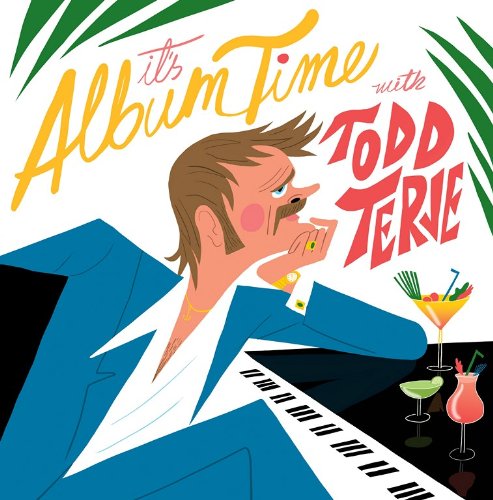 Well well, look who finally got round to releasing a long player. Ten years since his first release, Norwegian producer Todd Terje has enjoyed an elevated status over the past couple of years, be it through the immense Re-masters of the Universe remix collection, his infamous re-edits or the ubiquitous “Inspector Norse”, pointlessly tagged onto the end of the album, but always a joy.

Just judging this on that gloriously simple album title, you know what you’re about to indulge in is going to be bags of fun, and if you are aware of Terje’s leftfield leanings and dismissal of anything conventional, it’s going to be an eclectic ride. As proved by fellow Norwegians Prins Thomas and Lindstrom, the ability to genre hop but still produce a long player of cohesion that is noticeably the work of that artist is key. Terje masters this – It’s Album Time could not be the work of anyone else…at all.

The intro and title track works as a pre album jingle, the title whispered repeatedly over a mid-paced hip hop beat and ending with an explosion (think Pearl & Dean but even more kitsch). “Leisure Suit Preben” is equally as out there, led by harpsichord, xylophone, a Beach Boys-sounding break and synths that sound like seagulls and strings. Even weirder is “Svenk Sas”, a beatless Latino calypso track that comes across some kind of hallucinogenic head-fuck.

This first bunch of tracks are so headily eclectic that it’s easy to miss the fact that there’s no sign at all of the disco infused 4/4 dance music that Terje has become so well known for. But when it arrives, it’s clear that these are stone cold classics. “Strandbar” is effervescent house with sand between its toes, the dreamy synths smell of the sea and the key change of the piano line is so simple it’s an act of genius. “Delorean Dynamite” is the most propelling track here – refers to the legacy of disco making a sound that it’s retro but bang up to date: Moroder bass lines, Patrick Cowley disco synths and a fantastic Nile Rogers-influenced guitar break.

The showpiece of the album is a cover of Robert Palmer’s “Johnny & Mary”. This low-tempo version takes a new wave classic and transmutes it into despondent 80’s electronica featuring the world-weary vocals of Bryan Ferry. Terje has a history of making Ferry sound contemporary, be it his remix of his mid-80’s track “Don’t Stop the Dance”, his eleven minute jack-attack on the more recent “Alphaville” or his reboot of Roxy Music’s “Love is the Drug”. A whole album of Ferry singing this kind of material is tantalising, and whilst Terje couldn’t breathe life into Franz Ferdinand’s sagging career (he produced several tracks on their last album), on this showing, he could transform Ferry into some kind of latter day disco troubadour.

For all the career curveballs Terje has so far served up, it was always expected of him to come up with something pretty extraordinary for his debut. Still, to pull it off with such vigour is a pretty impressive feat. His maverick approach to genre-isation has not been reined in even slightly – in fact, it’s even more out there. It’s not just Album Time, it’s crazy psychedelic hoo-ha time, and it sounds pretty damn fine.