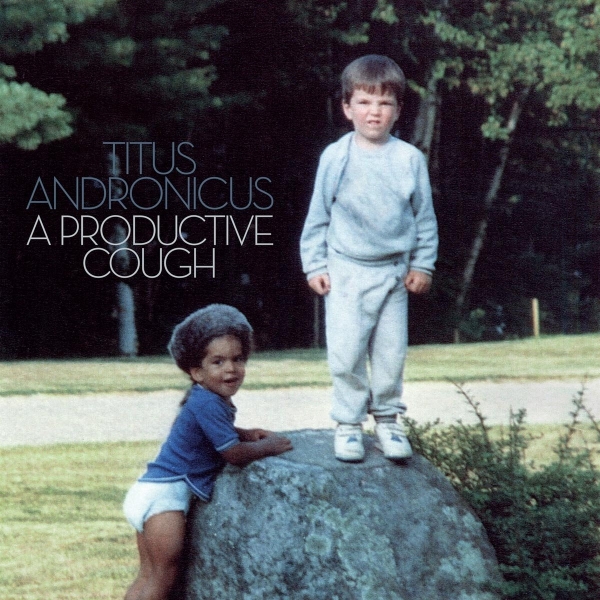 Titus Andronicus, the once “it” band of bad boys from New Jersey, seriously need to grow up.

What at first seemed to be an exciting, even invigorating band pumping out bar crawling anthems, the act has grown a bit stale of late. If their 2008 debut The Airing of Grievances was the first shots of the evening, then A Productive Cough very much sounds like last call at the corner bar: deep, drunken conversations that you realize were actually empty, somewhat aimless exchanges of jibberish in the morning.

This isn’t to say that Titus’s malaise and energy hasn’t remained intact: for hardcore fans, A Productive Cough has the potential of being another solid album in their discography. For anybody else, though, A Productive Cough may sound scattered, lengthy, and a bit pretentious. But at the heart of A Productive Cough, specifically the opener, the twinkling, Bowie-like “Number One (In New York),” the lyrical content seems dry and crass, with lyrics such as “Choking from smoking these Marlboro hundreds / Dysfunctional, fuck up in front of the public,” it seems a bit corny at this point. Titus are no longer the new kids on the block – and haven’t been for some time – and hearing that seems like something out of a drunken twenty-something’s personal diary.

Whereas their cover of “Like a Rolling Stone” is deeply reminiscent of a Springsteen rendition, Titus lose the battle of most New Jersey “guitar-rock” bands: avoid sounding like the Boss. It’s a tough trope to avoid, but the majority of A Productive Cough sounds like Titus aren’t even trying to avoid that exact trope. And though Cough is partly goofy and comical, the other part deadpan serious, Titus jump into political territory on “Real Talk,” chanting “If things are as bad as the newspaper says, we’re in for a real big war” in all of their dick-swinging, pub-rock glory. The end result is less impressive.

However, it should go without saying that Titus do indeed deliver a handful of redeeming moments here. On “Above the Bodega (Local Business),” one of the record’s singles leading up to the release, they directly channel The Clash, London Calling-era. Moments like these remind you of why you liked Titus Andronicus in the first place, and it’s a song that possesses that same magic that their first two albums, The Airing of Grievances and The Monitor, spewed so effortlessly.

What seems to be a triumphant clash of traditional hard rock and swinging piano ballads, Titus Andronicus sound much duller than before. The neo-literary lyricism of front man/guitarist Patrick Stickles is present, burgeoning at moments and then swallowed back down the wrong whole the next. If there’s any throwaway albums in Titus Andronicus’ decently lengthy discography, A Productive Cough is exactly that. It’s half magical, lush, and wholesome, and half redundant. Sometimes it’s easy to get caught up in repetitive cycles, not knowing when to quit. That moment has finally arrived for Titus Andronicus.