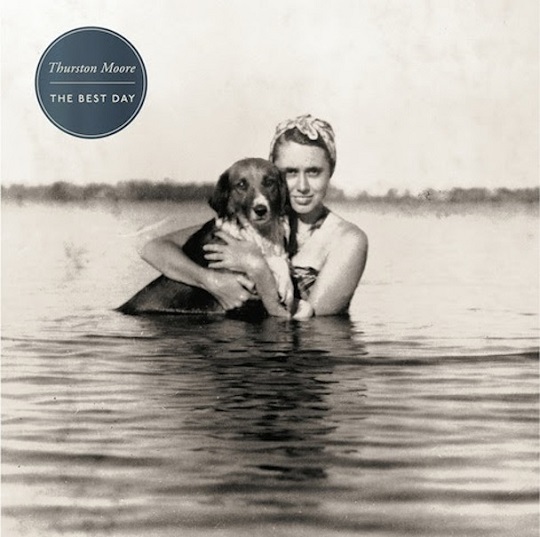 “I bought another Sonic Youth CD and it’s just noise!” exclaimed a disgusted Ellen Page as Juno in the 2007 movie. To some, the appeal of Sonic Youth’s unabashed chaos and dexterous juxtaposition of melody and discord is lost on them; critically, however, few are the bands that have enjoyed such critical amity. As one of its guiding lights, Thurston Moore was naturally endowed with those decades of goodwill, something he has very publicly almost entirely squandered in recent years.

In the here and now, it’s interesting to look back and find what you learn about a band after the band’s demise.  Fellow Sonic Youth pillars Kim Gordon and Lee Ranaldo have remained true to the ambition forged in their roots, while Moore’s attempts have proven woefully misguided.  Perhaps staking his revitalisation on his recent move to London, The Best Day features a crack band of Moore, SY alum Steve Shelley, My Bloody Valentine’s Deb Googe, and guitar journeyman James Sedwards.  In other words, it seems Moore is set on an environment unfettered by expectation and pretense, the perfect arena for an artistic reset amidst the recent negative press.

While The Best Day does allow Moore to be himself largely free of the shackles of his past – as much as can be, given his inextricable ties to his past – it just simply fails to hit the mark on too many occasions.  Moore makes a statement at the outset, launching the album with the 20-minute duo of “Speak To The Wild” and “Forevermore”, each his longest solo songs to date.  While the former would sit comfortably on SY’s 2002 Murray Street, it’s decidedly less complicated, relying more on trance-like qualities than a delicate balance of calm and fury.  It’s a nicely subdued side of Moore while still offering plenty of satisfying guitar noodling; problem is, it’s at least two minutes too long.  That literally goes double for its follow-up; both songs manage to appear to reach a reasonable end, only to drone on well beyond, past the point of interest, until Moore’s vocals kick back in jarring you back to the realisation that, yes, the song is still going.

From there, The Best Day’s songs are at least at justifiable lengths, though Moore’s ability to captivate still remains suspect.  The title track is a pleasant, Kinks-ian jaunt pillaged by a hamfisted rawk guitar solo midway through while “Detonation” is a formless stab at garage rock.  His acoustic excursions of “Tape” and “Vocabularies” go nowhere and manage to feel twice as long as they actually are.  Looking past the dreadful song title, Moore finally manages to synthesize his subtler tendencies with the brutish hard rock he flails at elsewhere in the album on “Germs Burn”, seamlessly intertwining them throughout.  It bears noting that Moore did employ a local London poet, Radiuex Radio, as lyricist on several songs to inject the album with some local flavour, though these come off as fish out of water, particularly “Detonation”, which has Moore ranting about hammers and sickles and using a “toy grenade”.  Otherwise, The Best Day is mostly gobbledygook lyrically, with Moore turning the occasional phrase of interest, but none of it really meaning much of anything.

If The Best Day set out to achieve anything, it does at least plant a stake in the ground for Thurston Moore, marking a point where we can start with him again should we desire, and move forward, leaving the pockmarks of the recent past behind.  That is the key, though – The Best Day doesn’t offer much in the way of compelling us to venture forth; that is, even if we were inclined to in the first place.