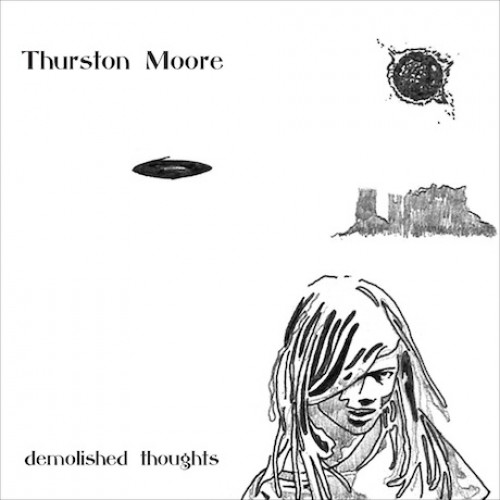 It’s difficult to keep up with Thurston Moore’s experimental endeavors. With his latest album, produced by Beck, Moore summons the simplistic strength of acoustic guitars and strings to put forth a melancholy affair. The amplifiers are completely turned off and the pace is slowed to a steady meander centered around Moore’s reflective and introspective prose. Demolished Thoughts, like Moore’s other solo efforts, strays from the sound Sonic Youth is known for. The album moves around a post pop stew with ethereal strings and violins that complement the recognizable timbre of a 12 string guitar. Add mandolins and plucked patterns to the mix, and the effect is resonant without the need of a rhythm section.

Demolished Thoughts is not likely to push Moore out of his band’s shadow, and it is evident that he intends it this way. The songs weave together without the hub of chorus or any memorable hooks, with exception of ‘Circulation’ which, given the right overdrive pedal, could function as a gateway drug to Sonic Youth’s noise orchestrations. The 12 string is exploited to the maximum on most tracks allowing the mystique of the instrument to be transformed with the saddened strumming patterns of an alt-rock legend. It is as if Moore has this pent up sadness and calmness that needs to be released and every song feels like it was hatched sitting underneath a clear starry night. Moore’s voice stays within the same quiet range through most of the album emitting an undisturbed quality. Every song also seems to stay in the same key which becomes tiresome after a certain duration, though each track stands up individually. Moore’s fan base will no doubt love the new release, but largely, there is nothing here that will attract a new mass of followers or appease Sonic Youth fans. That said, there are beautiful moments sprinkled throughout the record including ‘Orchard Street’ which clocks in at over 7 minutes and features a crescendo of pretty noise built up over the last 3 minutes with a combination of contrasting and complementing elements bearing an almost art-pop sort of feel.

Demolished Thoughts is perhaps not best suited as a album you play in its entirety and it is a complete diversion from anything Sonic Youth. The album demonstrates a tension between peacefulness and restlessness played out on a 12 string guitar with help from strings and mandolins. It may be best described as a musical journal of an alt-rock legend.