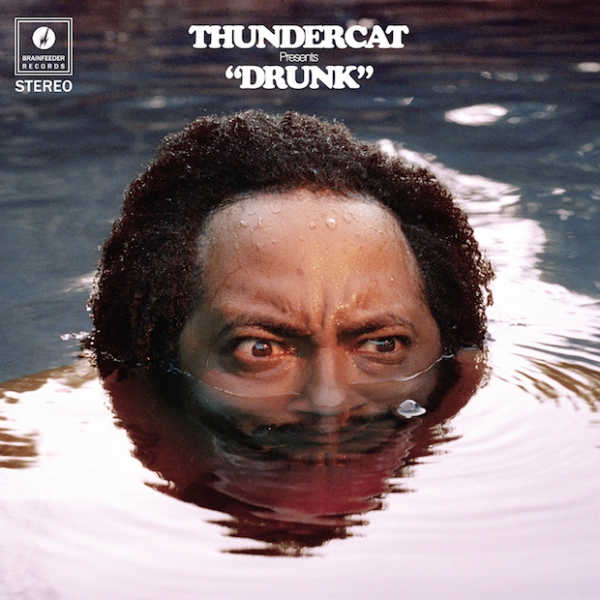 ​If there’s one man who could make a silly album sound this good, it’s Stephen Bruner.

Drunk is imperfect and messy, and quite long, but astonishing. The most delicious moments of pop are scattered amongst off kilter bass noodeling or cheesy synth squiggles. One minute you can be floating with a fantastic slice of 80s-influenced pop, the next you're stumbling through a bass onslaught, emerging sweaty and discombobulated, at which point Bruner might drop another polished hit like "Them Changes", before wobbling off again on some other mad tangent.

It's unpredictable and wonderful, and from the 39 seconds of opener "Rabbot Ho", Drunk doesn’t pretend to be anything other than this voyage of intoxication. It's Thundercat's most elaborate and expansive work to date; an accolade itself which is no mean feat. 2013's Apocalypse and 2011's The Golden Age of Apocalypse were arguably jazzier albeit slightly less chaotic works in delivery and direction.

Drunk is also a decent chunk longer than both. But perhaps the biggest difference is tied to the anticipation behind Drunk. Since Apocalypse, Bruner's profile has grown exponentially: having worked extensively on Kendrick Lamar's revered To Pimp a Butterfly, Kamasi Washington's The Epic and continued to partner with Flying Lotus for his last and most ambitious record so far, You're Dead, the number of A-list credits to Bruner's name has meant he's been able to pull in a few stars for himself this time around: Pharrell, Wiz Khalifa, Kendrick, Kenny Loggins and Michael McDonald are on this album. That mix in of itself is frankly incredible. The fact that it actually works for the record is a success story in its own right.

Drunk is not without its challenging segments. 51 minutes has been spread pretty thinly between 23 songs, resulting in occasions where Drunk can feel overwhelming or a little flabby. But had Bruner released an album of solely "Them Changes"-esque funk hits, it wouldn't have felt like a Thundercat record. The mix is uniquely his. And it wouldn’t have allowed for the blurring of eras he's achieved. "Show you the Way" is part pastiche, part solid gold. And with the end of that track, the understated swagger of "Walk on By" tweaks the formula of Drunk just enough to usher Kenny and Michael out, and Kendrick in. Is there any other album where Kenny Loggins, Michael McDonald, and Kendrick Lamar could live within minutes of one another?

Ultimately Drunk is an impressive record which commands multiple listens as much by its quality as its complexity. It shows off Bruner at the height of his powers as an artist shapeshifting through genres but always leaving his scent in the air. And it proves that Kanny Loggins and Michael McDonald have still got it.