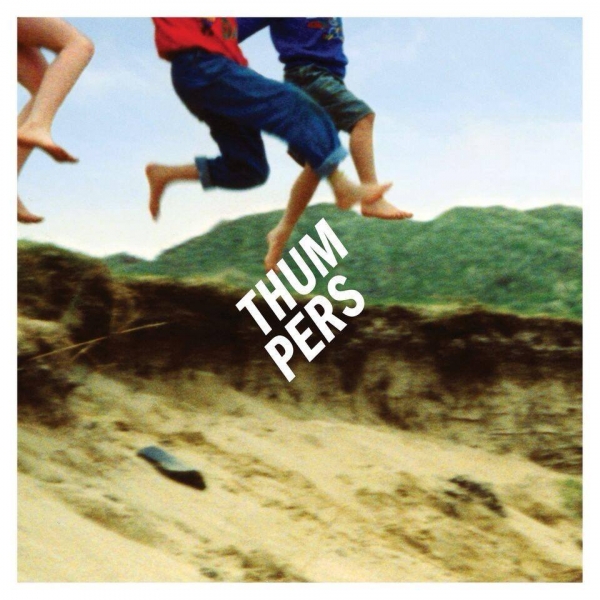 ​London’s Thumpers were one of our Ones To Watch for this year, and for good reason: they churn out a sensational elixir, comprising bouncing riffs, jerky right-angle rhythms and pop with more fizz than Mentos and Diet Coke. Euphoric chaos is the name of the game for Thumpers, made up of two long-time pals, Marcus Pepperell and John Hamson, Jr., and, presumably, an IV full of E-numbers. The twosome were in Pull Tiger Tail before its untimely demise, and when Hamson was touring with the likes of Friendly Fires during the aftermath, they began eking out the noises that would eventually form Thumpers’ early works.

Soon enough, we were being drip-fed a steady diet of technicolor spectacles and indie-pop pandemonium. “Sound Of Screams” features similar percussion to that on Tune-Yards’ latest effort Nikki Knack – it’s tom heavy, eccentric and vivacious. There’s also noodly fretwork, rekindling memories of Everything Everything’s first LP, and rousing falsetto chorus melodies that get stuck in your brain like grappling hooks. Hamson and Pepperell dial back (slightly) their quirks and bombast or their next single- “Dancing’s Done” – though the chorus is still a high-powered maelstrom of giddy blue-Smartie sparks. After our appetites for Thumpers were well and truly whetted, we heard rumblings of their debut LP, Galore. Released in the UK three months after its initial US release for some reason, Galore arrives with lofty hopes and expectations. However, everything we’ve heard so far has given us no reason to worry – it’s not like they’d bow to that pressure, is it?

Not a sodding chance.

“Tame”, replete with talkbox (or so it sounds) sounds like a contemporary “Livin’ On A Prayer”, is all jam-packed with shredding, cock-rock moxie and shuddering beats. “The Wilder Wise” adheres to conventions slightly more – Hamsons’ sticksmanning is less primal, more standardly rhythmic, and there’s more synths to fill out the gaps. However, there’s a suspense, and few patches of overt glee in the vocal melodies. It’s almost like a long-lost Klaxons number. “Marvel”, gleaming like a Silent Alarm era Bloc Party banger, is a potent brew of twinkling axes, high-strung gang vocals and lethargic, methodical kick-snare plods. While Thumpers fleetingly bear resemblance to a breadth of acts, they never do for long, and this record is entirely their own – they sound like Thumpers, and nothing else, even if the odd occasion bears similarities to another odd occasion by another band.

This is a record that easily forms a bond with your ligaments and joints – and your squishy emotional centre in its restrained moments – by Pepperell, Hamson, and a stream of best buds, simply being true to themselves. It’s a remarkably uncompromising, genuine album, which perhaps isn’t poignant to the extent of making you question all you thought was true, but it handles the details, the subtle moments of love and life, with grace and class. It’s an honest album primarily because Thumpers are just being themselve. Arguably “Now We Are Sixteen”, featuring another fabulous indie-pop duo (Summer Camp), embodies this essence best – smooshing layers upon layers of synth, guitar and percussion, as well as a whole host of intertwining voices ruminating on youth and what modern young life is like.

Granted, a large portion of the album has already seeped out and been digested by our ears (what an astute grasp of the human anatomy we have), but the power’s not diminished. This is an anthology of awesome. Thumpers maintain a vertigo-high quality on Galore, and provide us with another option in the hotly-contested battle for ‘album of the summer’. It not a record you’ll be able to just leave rolling in the background; it holds your attention to ransom, and by the time Galore‘s final beat strikes, you’ll have lost 49 minutes of your day/night to sheer delight, rhythmic convulsions and cramp in your jaw from beaming like a Miss America hopeful.