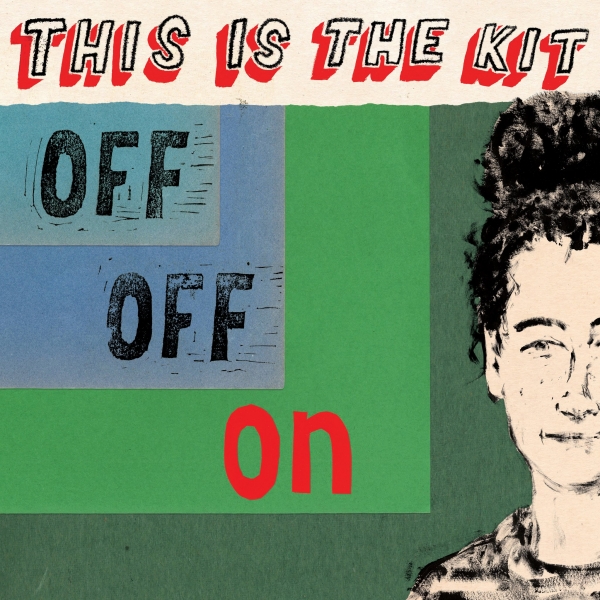 Off Off On is undoubtedly This Is The Kit’s best work yet - clever lyrics, clashing instrumentals and unique vocal patterns create a dizzying and heady album that feels as refreshing as it does personal.

The swirling style of the album is summed up in the killer opening track, “Found Out”. Overlapping voices jump out over plucky strings, as lead singer Kate Stables creates a dialogue with herself: “Speak the words / let yourself breathe / deep relief / ask yourself”. Accelerating drum beats make the mood flit between intense and bubbly, a depiction of the unpredictability of the world around us.

The whole album delicately flickers between panic and calm. It was developed by the band in an isolated cottage in Wales, and it’s easy to see a reflection of the setting in the songs. Changing weather and rushing rivers are encapsulated through crashing mood swings and tempo changes. The record’s title, Off Off On, is a similar depiction of that uncertainty, swinging between feeling good and centred, and bad and anxious.

“This Is What You Did” is a record highlight. Stables describes the track as a “panic attack song” - frenzied beats coupled with rapid banjo and slightly sinister talk-singing create feelings of mania and unease (yet still result in an incredibly catchy song). The feeling of being trapped in negative and anxious thoughts is perfectly constructed through vocal overlapping - we never know which thought is real, and which is inside our own heads. Lyrics focus on self-doubt and worth - feeling all the more personal due to everything 2020 has brought along with it: “Better try to get out, get outside / And your limbs, they get out of your head again / And the problems they save as before / Comes around again, pretty repetitive”

This Is The Kit have always been connoisseurs of creating slow building tension. In a song that feels reminiscent of 2017’s Moonshine Freeze, the band crescendo into a chant of “rocks and water” - again a nod to the location the album was created in, but also an example of finding the beauty in simplicity. This is the way the album has been produced - simply but magnificently. Producer Josh Kaufman - New York-based musician, Hold Steady collaborator and member of Bonny Light Horseman and Muzz - has elevated the album, finding the perfect mix of chaotic and smooth.

An exciting cacophony of instruments pop up throughout the record - on “Slider” there’s subtle saxophone from Lorenzo Prati, on “No Such Thing” brass creates a jazzy and elegant tone, and woodwind springs up in “Coming To Get You Nowhere” as Stables repeats the line “energy, energy, please”.

The themes are as diverse as the instruments, ranging from sadness to power. “Slider” is a tribute to a friend who passed away after being ill in hospital. Delicate vocals overlay a melancholic saxophone, as lyrics explore both sides of every phrase, revealing the new perspective that arrives after trauma: “Making time / losing time”, “To be held / and to hold”. In antithesis, “Was Magician” is a story of a young woman reaching her full powers. Based on the books of author Ursula K. Le Guin, Stables has delivered a quietly compelling call to action for her generation.

The album ends on a nearly seven minute reminder to “Keep Going”, a sentimental and heartening song that encourages hope and the promise of a better future. It is at its core, the message everyone needs to hear this year.