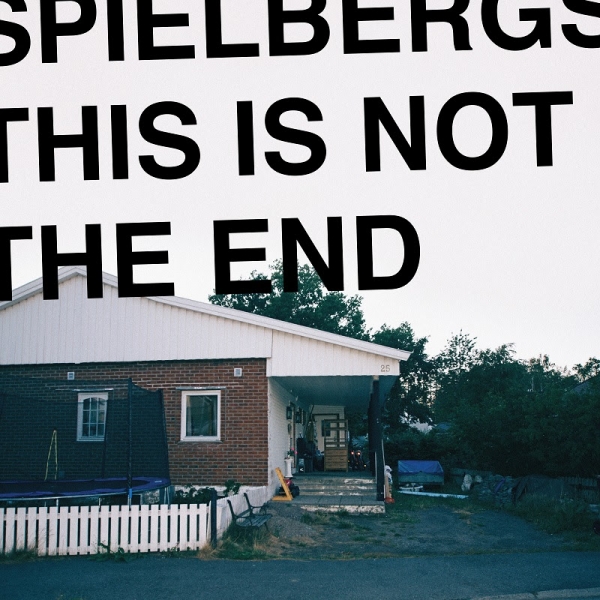 “I wanna leave this country, I wanna flee this land.”

Encapsulating a dream of escape, this line, taken from the track “Distant Star”, sums up the raucous abandon of Spielbergs. It sets the tone for a record cloaked in the warm fuzz of youth, longing for a new beginning, or at the very least, a change of scene. Not until the thrashing guitars and thudding bass of “4AM” are we given insight into the reasons behind these escapologist desires, the urge to Houdini theirselves out of their surroundings. As frontman Mads Baklien yells “When I was young / I was never anxious”, we are let in on the secret; time, growing up, growing old and all the weight of responsibility that bears down.

Having toiled separately for years on the Oslo gig circuit as members of countless other bands, there is something unendingly endearing about the trio's pursuit of their youthful ambition, and refusal to let the passing of time diminish their drive and creative spark. A statement of the here and now, bubbling with an excited anticipation for the future as much as it is a nostalgic review of the past, their debut record This Is Not The End is the sound of young hearts winning over weary bodies.

2018 saw Spielbergs release their astounding debut EP Distant Star, setting out the group's stall as purveyors of gleaming garage rock (“Daisy! It’s the New Me”), while nodding to their more experimental noodling’s on the twisting, layered fog of “Ghost Boy”. The fact that two of the tracks on that EP (“We Are All Going To Die” and “Distant Star”) can be found on This Is Not The End could be seen as an easy way out, padding to accommodate a lack of new ideas. Yet their inclusion here is a master stroke on the band's part; seamlessly interwoven into the overall narrative of the record, here they feel like vital mission statements worth repeating.

There is a comforting familiarity to Spielbergs that is hard to pin down, like some joyously discordant racket rattling through garage doors. They share the same guttural passion as Japandroids with hints of early Idlewild, but at the same time seem unfazed embracing the tropes of classic rock. The record is stacked with swirling solos, strained palm muted breaks delve into torrential distortion and cataclysmic drumming quakes throughout. Proof in point being the perpetual, heart attack inducing drums of “We Are All Going To Die”.

The band undoubtedly have a knack for bleary eyed, sweat soaked anthems, rough enough around the edges to warrant repeated listens. The bratty, fuzzed out opening moments of “NFL” fade and swell to a monolithic, sky-scraping end. Elsewhere, “Bad Friend”, is the perfect homage to mid ‘00s pop punk; with its tongue in cheek lead guitar line and group chant chorus, it will resonate hard with all those who grew up in the heyday of MTV 2.

What sets Spielbergs apart is the depth of their influences and willingness to take risks. It is within these moments that the immersive interest of the record really lies. The first real change of pace comes on the creeping shoegaze of “Familiar”. Laconic vocals and a hypnotically incessant guitar line soon collapse under an avalanche of chords in what stands as one of the most epic moments of the record. The closing trill of synth even echoes the Lowery Organ of The Who’s “Baba O'Riley”. Fitting for a record that often reflects on its own - albeit updated - version of a teenage wasteland.

The second half of the album finds Spielbergs closer in sound to Explosions In The Sky than Beach Slang, where the slow post-rock build and moody atmospherics of the comically titled “McDonald’s (Please Don’t Fuck Up My Order)” illuminate an exciting underbelly of the band that begs further exploration.

As a standalone document, this is a gem of an album. However if as its title suggests, this is just the beginning, the foundations are here for something very special indeed. Perhaps an indication of where they are headed comes on album closer “Forevermore”. Effectively marrying the two sides of the group, it bursts with hook laden boldness, while displaying widescreen ambition with sincerity and poise. But now is not the time to speculate on what the future may hold for the group, it is enough to sit back and enjoy the ride; lost in the whirling hurricane of shoegaze, pop punk and post rock that is all their own.

Old age comes to those of us lucky enough to reach it, and provides plenty opportunity to look back and wonder. On This Is Not The End Spielbergs invite you to revel in the burnt pages of your youth, while optimistically awaiting a future unknown. Why not revel in it with them and let yourself get carried away? It’s a beautiful thing.