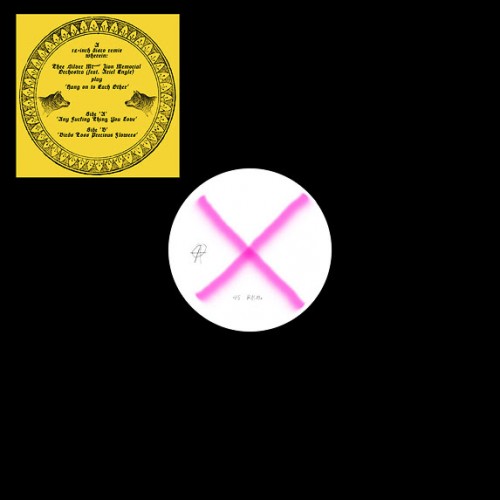 In line with the relative normality of obscurity for TSMZ, the Hang On To Each Other EP features two ‘remixes’, more like complete re-imaginings, of the aforementioned track from 2005’s Horses In The Sky. The original track, now released almost a decade ago, is a hypnotic canon, layer upon layer of vocals over sparse harmonium chords, set to the backdrop of a roaring campfire.

Explaining their characteristically left-field release choice, the band proffered “the chords to that tune are like house music chords, and we figured we’d re-record it someday…thusly and EARNESTLY, 4-on-the-floor, drum machines, arpeggiators. pink lasers and grape flavoured smoke machines…because we love that kind of music and impromptu dance parties too”.

“Any Fucking Thing You Love” would almost pass for a conventional TSMZ track; its length certainly suggests so, excepting for here a wall of crushing synths and guttural howls replace the thrashed guitars and soaring string soundscapes. Meanwhile Ariel Engle of Montreal’s AroarA provides the only recognisable fragment of the EP’s namesake. Her repeated proclamation, “Hang On To Each Other!”, distorted and echoing like a Karen O demo-tape circa Show Your Bones, are an appositive reminder that amongst the glorious din and punk aesthetic, TSMZ are capable of jubilant hooks. The result is captivating.

Elsewhere, the furiously wailing foghorn that opens “Birds Toss Precious Flowers” is a prelude to twelve minutes of psychedelic EDM. Engle’s vocals contort in rising trills before falling back to the lyric “we all got bored so afraid” before being engulfed by expansive gritty synth swells and the more familiar sound of strings demanding attention. This is music made for Berlin nightclubs as much as for post-rock enthusiasts, the repetitive beats tailor made for the kind of two-step that TSMZ’s fans might not be used to.

Amidst TSMZ’s ever-growing body of brilliantly eclectic work, the two re-imaginings that comprise this EP will only go to re-affirm the band’s role for founder Efrin Menuck as a platform to experiment outside the supposably loose musical confines of Godspeed You! Black Emperor.

From ethereal post-punk orchestral arrangements via thrashing guitars and bristling, indignant lyricism to brutal synth explorations and cyclical beats, Thee Silver Mt Zion Memorial Orchestra have proved themselves equally adept at stretching the musical limitations of everything they turn their virtuosic minds to.